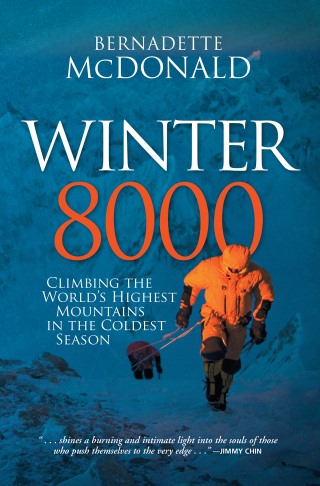 Climbing the World’s Highest Mountains in the Coldest Season

While you wouldn’t expect climbing an 8000-meter peak in winter to be a popular activity, there have been 178 expeditions (as of 2019) to the Himalaya and Karakoram during the cruelest season to do just that. Polish alpinist, Voytek Kurtyka, termed the practice the "art of suffering." The stories here range from the French climber Elisabeth Revol’s solo winter attempt of Makalu, to American Cory Richards and his dramatic effort on Gasherbrum II with famed Italian alpinist Simone Moro and Kazakh hard man Denis Urubko. Award-winning author Bernadette McDonald traveled extensively to interview many of the climbers featured in this book--including Revol, the climbing partner of Tomek Mackiewicz, and Anna Mackiewicz, his widow, meeting them just a few months after Mackiewicz’s death on Nanga Parbat. McDonald’s many personal relationships with profiled climbers and her ability to tap into emotions and family histories lend Winter 8000 an intimacy too often lacking in mountaineering histories.

These accounts prove the point: Nature is not subservient to man.

Bernadette McDonald: Bernadette McDonald is the author of eleven books on mountaineering and mountain culture, including Brotherhood of the Rope: the Biography of Charles Houston (Mountaineers Books, 2007) and I’ll Call You in Kathmandu: the Elizabeth Hawley Story (Mountaineers Books, 2005). McDonald has won numerous awards, including her second Boardman Tasker Prize and the Banff Award for Mountain Literature for Art of Freedom (Rocky Mountain Books, 2017). In 2011 the American Alpine Club awarded her their highest literary honour for excellence in mountain literature. She was the founding Vice President of Mountain Culture at The Banff Centre and director of the Banff Mountain Festivals for 20 years. McDonald has degrees in English Literature and Music. When not writing, she climbs, hikes, skis, paddles and grows grapes.