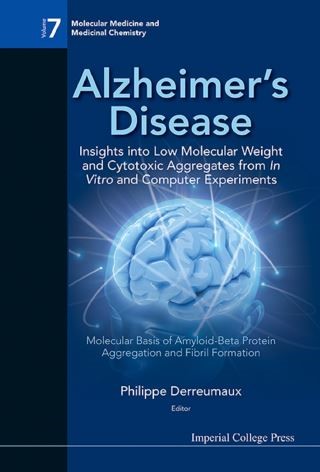 Alzheimer's disease is the most common form of senile dementia, affecting more than 24 million people worldwide. It is characterised pathologically by abnormally high levels of neurofibrillary tangles resulting from the accumulation of tau protein in dead and dying neurons, and by elevated numbers of senile plaques in the cortex and hippocampus of the brain. The major component of senile plaques is a small protein of 39-43 amino acids called amyloid-β (Aβ). Thus far, no treatment has been shown to slow the progression of sporadic and familial Alzheimer's disease.A large body of evidence points, however, to the early Aβ-formed oligomers as the primary toxic species in Alzheimer's disease. A powerful strategy for developing pharmaceutical treatments against Alzheimer's is to elucidate the pathways of oligomer formation and determine the structures of the toxic aggregates.This book provides a panoramic view across recent in vitro and in vivo studies along with state-of-the-art computer simulations, designed to increase the readers' understanding of Aβ oligomerisation and fibril formation. At the same time, the book delves into the pathogenesis of familial and sporadic Alzheimer's disease at the atomic level of detail.Written by leading authors in their respective fields, this book will be valuable to all scientists working on Alzheimer's disease.