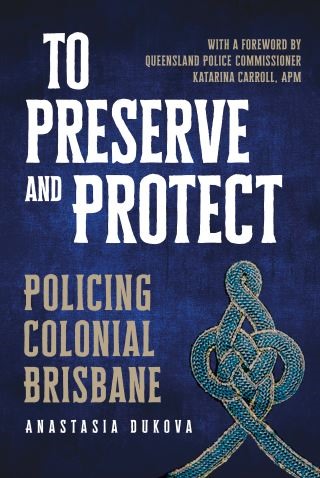 To Preserve and Protect

Early Australian policing had its roots on the streets of Dublin and London, where many of Australia's first law and order enforcers hailed from. Intrigued by this connection, historian Anastasia Dukova has researched and recreated the lives of colonial police officers and criminals in her adopted home city of Brisbane. Through exploring their personal stories, Dukova highlights how biography and history are inextricably linked and reveals the differences between metropolitan aspirations and colonial reality. To Preserve and Protect exposes political power abuse, corruption, mismanagement, professional burnout, and gendered justice, issues which continue to challenge police forces.

Anastasia Dukova: Anastasia Dukova holds a PhD in crime and policing history from the University of Dublin, Trinity College. She is a member of the Irish Association of Professional Historians and the Professional Historians Association Queensland. Her research on nineteenth-century Irish and Australian policing history and historical criminology has been published widely, and her doctoral and postdoctoral findings were published in 2016 as A History of the Dublin Metropolitan Police and its Colonial Legacy in Palgrave Macmillan's World Histories of Crime, Culture and Violence series. She has held fellowships with the State Library of Queensland, Harry Gentle Resource Centre and Griffith Criminology Institute, as well as a postdoctoral fellowship at the University of Toronto and a postgraduate scholarship with the Irish Research Council. Anastasia is a partner investigator on an Australian Research Council Discovery Project that investigates the policing of migrant communities in Britain and Australia throughout the twentieth century (DP180102200). She also lends her historical crime and policing expertise to public and professional lectures, as well as popular history projects such as Century Ireland, RTÉ, and Who Do You Think You Are? www.policingcolonialbrisbane.com