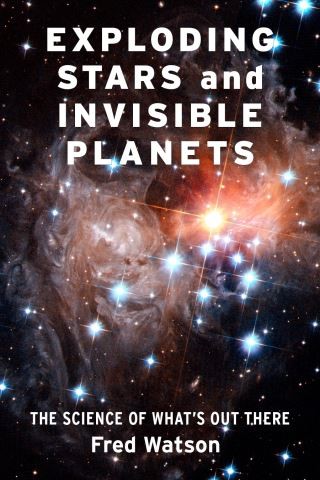 The Science of What's Out There

What happens to space and matter near a black hole? Where did the moon come from? How do we know what stars are made of? Are we alone in the universe?

In Exploding Stars and Invisible Planets, Fred Watson, an award-winning astronomer, presents the most up-to-date knowledge on hot topics in astronomy and space science, providing a fascinating and entertaining account of the latest research. Watson explains how to find invisible planets around other stars, why dark matter matters, and the future of citizen space travel, all while recounting the seismic shifts in understanding that have taken place during his illustrious career.

The book features illuminating discussions of microbes in space; the dividing line between day and night; exploding stars and light echoes; fast radio bursts and signals from space; meteors, meteorites, and space dust; what happened to the Martian ocean; the seas and lakes of Titan; and the birth of the universe.

Fred Watson: Fred Watson is astronomer at large with the Australian Commonwealth Department of Industry, Innovation, and Science. He worked at both of Britain’s royal observatories before joining the Australian Astronomical Observatory as astronomer in charge in 1995. Recognized internationally for helping to pioneer the use of fiber optics in astronomy during the 1980s and ’90s, Watson is best known today for his radio and TV broadcasts and popular astronomy books, which include Stargazer: The Life and Times of the Telescope (2004) and Why Is Uranus Upside Down? And Other Questions About the Universe (2007). He also has an asteroid named after him (5691 Fredwatson).