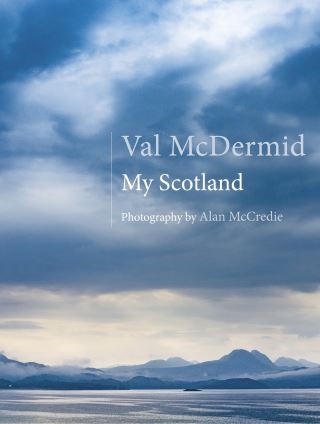 'I love stories. My life has been book-ended and bookmarked by hearing them, reading them and telling them. In my mind's eye, I can see where each of these stories unfolds . . .'

In MY SCOTLAND, Sunday Times bestselling author Val McDermid takes readers to the landscapes she has known all her life, and the places where her stories and characters reside.

Accompanied by over 100 stunning photographs, this remarkable book uncovers Val's own Scotland in all its glory - from the iconic Isle of Skye to the majestic streets of Edinburgh; from the undiscovered hideaways of the Highlands to the wild and untamed Jura.

Val McDermid: Val McDermid is a number one bestseller whose novels have been translated into more than thirty languages, and have sold over sixteen million copies. She has won many awards internationally, including the CWA Gold Dagger for best crime novel of the year and the LA Times Book of the Year Award. She was inducted into the ITV3 Crime Thriller Awards Hall of Fame in 2009, was the recipient of the CWA Cartier Diamond Dagger in 2010 and received the Lambda Literary Foundation Pioneer Award in 2011. In 2016, Val received the Outstanding Contribution to Crime Fiction Award at the Theakstons Old Peculier Crime Writing Festival and in 2017 received the DIVA Literary Prize for Crime, and was elected a Fellow of both the Royal Society of Literature and the Royal Society of Edinburgh. Val has served as a judge for the Women's Prize for Fiction and the Man Booker Prize, and was Chair of the Wellcome Book Prize in 2017. She is the recipient of six honorary doctorates and is an Honorary Fellow of St Hilda's College, Oxford. She writes full-time and divides her time between Edinburgh and East Neuk of Fife.