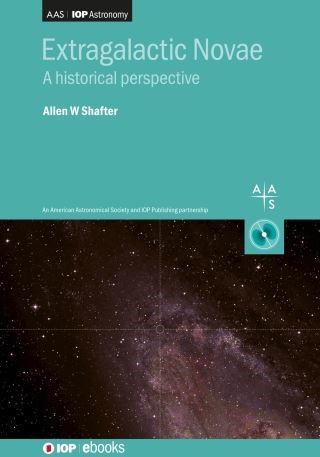 Extragalactic Novae: A historical perspective takes the reader on a journey chronicling the study of a class of eruptive variable stars known as "Novae Stella", Latin for "New Stars". These mysterious transient objects, now referred to simply as novae, have been recognized since antiquity, suddenly appearing in the night sky before slowly fading back into obscurity. The book begins with a brief introduction to the early observations, including an overview of the role that novae played in the birth of extragalactic astronomy, and concludes with a discussion of how nova observations over the past century have contributed to our knowledge of close binary star populations in nearby galaxies. Along the way, the history of our understanding of the nova phenomena, in the Milky Way and beyond, is unveiled. In particular, the author describes how the enigmatic nova eruptions were finally realized to be the result of thermonuclear runaways on the surfaces of accreting white dwarf stars, how a controversial correlation between a nova's peak luminosity and its rate of decline (the MMRD relation) has been used in extragalactic distance determinations, and how recent observations have bolstered the case that novae may form a significant channel for the production of type Ia supernovae. These topics, and more, are recounted by an observer who has spent the past 35 years studying these fascinating objects.

Allen W Shafter is an emeritus professor of astronomy at San Diego State University, and has been studying extragalactic novae for more than 35 years. During his career, Shafter has published more than 100 refereed papers, mostly on cataclysmic variable stars, generally, and novae in particular. In addition to his faculty responsibilities, Shafter currently serves as a scientific editor for the Stars and Stellar Physics corridor of the AAS journals.