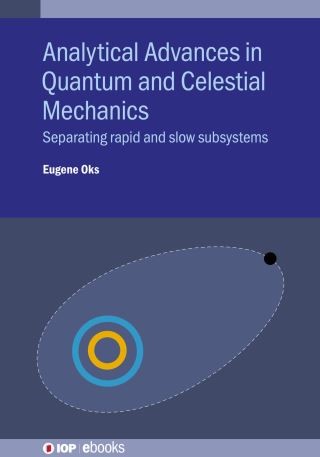 This book is primarily devoted to recent advances in applying the approximate analytical method of the separation of rapid and slow subsystems to other quantum realms. Such systems include hydrogen atoms in a high-frequency laser field, rotator-dipoles in a high-frequency field, one-electron Rydberg quasimolecules in various fields, muonic-electronic helium atoms and the dynamical Stark broadening of spectral lines by plasma ions and electrons. Novel applications to some unrestricted three-body systems in celestial mechanics, such as a planet orbiting around a binary star or a star-planet-moon system, are also presented. These results are practically important in the quest for achieving controlled nuclear fusion on Earth, as well as expanding practical applications of lasers and other related fields.

Eugene Oks received his PhD from the Moscow Institute of Science and Technology, and attained the highest degree of Doctor of Sciences from the Institute of General Physics of the Academy of Sciences of the USSR. He has conducted research in atomic and molecular physics, plasma physics, laser physics, nonlinear dynamics and astrophysics, and he is the Editor-in-Cheif of International Review of Atomic and Molecular Physics.