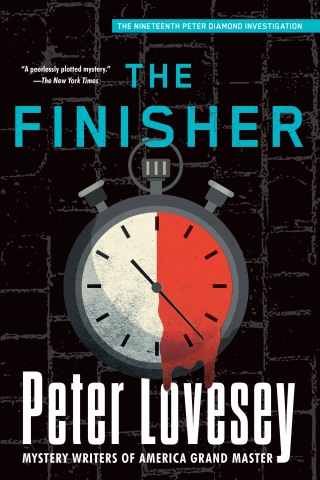 On the 50th anniversary of the publication of his first novel, Peter Lovesey, Mystery Writers of America Grand Master and titan of the British detective novel, returns to the subject of his very first mystery—running.

Through a particularly ill-fated series of events, couch potato Maeve Kelly, an elementary school teacher whose mother always assured her “curvy” girls shouldn’t waste their time trying to be fit, has been forced to sign up for the Other Half, Bath’s springtime half marathon. The training is brutal, but she must disprove her mother and collect pledges for her aunt’s beloved charity. What Maeve doesn’t know is just how vicious some of the other runners are.

Meanwhile, Detective Peter Diamond is tasked with crowd control on the raucous day of the race—and catches sight of a violent criminal he put away a decade ago, and who very much seems to be up to his old tricks now that he is paroled. Diamond’s hackles are already up when he learns that one of the runners never crossed the finish line and disappeared without a trace. Was Diamond a spectator to murder?

Peter Lovesey: Peter Lovesey is the author of forty highly praised mystery novels. He has been named a Grand Master by the Mystery Writers of America and has been awarded the CWA Gold and Silver Daggers, the Cartier Diamond Dagger for Lifetime Achievement, the Strand Magazine Award for Lifetime Achievement, the Macavity, Barry, and Anthony Awards, and many other honors. He lives in Shrewsbury, England.