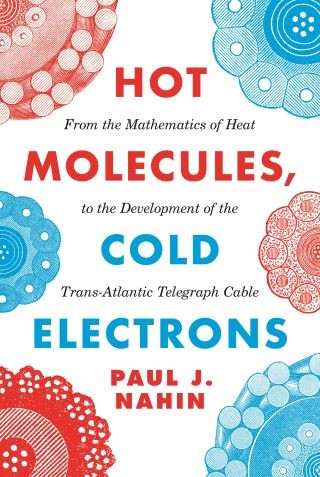 Heat, like gravity, shapes nearly every aspect of our world and universe, from how milk dissolves in coffee to how molten planets cool. The heat equation, a cornerstone of modern physics, demystifies such processes, painting a mathematical picture of the way heat diffuses through matter. Presenting the mathematics and history behind the heat equation, Hot Molecules, Cold Electrons tells the remarkable story of how this foundational idea brought about one of the greatest technological advancements of the modern era.

Paul Nahin vividly recounts the heat equation’s tremendous influence on society, showing how French mathematical physicist Joseph Fourier discovered, derived, and solved the equation in the early nineteenth century. Nahin then follows Scottish physicist William Thomson, whose further analysis of Fourier’s explorations led to the pioneering trans-Atlantic telegraph cable. This feat of engineering reduced the time it took to send a message across the ocean from weeks to minutes. Readers also learn that Thomson used Fourier’s solutions to calculate the age of the earth, and, in a bit of colorful lore, that writer Charles Dickens relied on the trans-Atlantic cable to save himself from a career-damaging scandal. The book’s mathematical and scientific explorations can be easily understood by anyone with a basic knowledge of high school calculus and physics, and MATLAB code is included to aid readers who would like to solve the heat equation themselves.

A testament to the intricate links between mathematics and physics, Hot Molecules, Cold Electrons offers a fascinating glimpse into the relationship between a formative equation and one of the most important developments in the history of human communication.

Paul J. Nahin: Paul J. Nahin is the author of many popular math books, including How to Fall Slower Than Gravity, Dr. Euler’s Fabulous Formula, and An Imaginary Tale (all Princeton). He is professor emeritus of electrical engineering at the University of New Hampshire and received the 2017 Chandler Davis Prize for Excellence in Expository Writing in Mathematics. He lives in Exeter, New Hampshire.