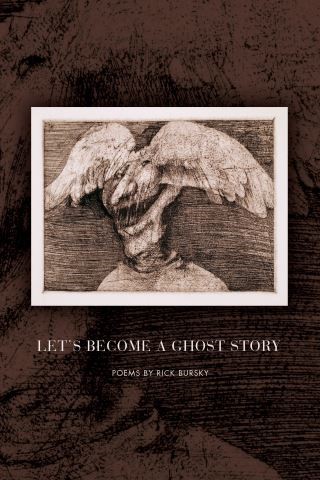 Rick Bursky’s latest poetry collection reaches into the peculiarities of human relationships with emotional accuracy, charm, and a touch of surrealism. In poems that channel memories of brief encounters and long-lost loves through imagination and half-recalled dreams, Let’s Become a Ghost Story turns nostalgia inside-out to reveal the innate humor of our most intimate connections.

Originally from New York City, Rick Bursky now lives in Los Angeles where he works in advertising (a television commercial he wrote appeared on the 2006 Super Bowl and won advertising awards around the world). He also teaches poetry at the UCLA Extension Writers’ Program, and occasionally copywriting at USC. His previous full-length collections are Death Obscura (Sarabande Books 2010), and The Soup of Something Missing (Bear Star Press 2004); and his chapbook, The Invention of Fiction, was published by Hollyridge Press in 2005. He has a BFA from Art Center College of Design in Pasadena and an MFA from Warren Wilson College.