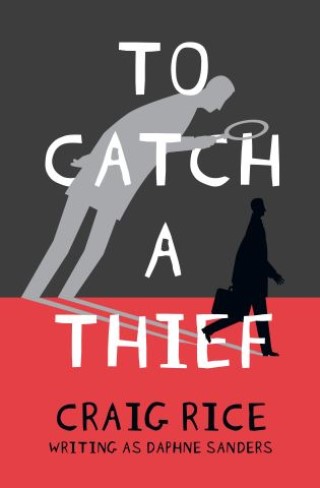 To Catch a Thief

A mysterious Robin Hood targets Wall Street titans in this “exciting ” novel by the author of the John J. Malone Mysteries (The Cincinnati Enquirer).

Thanks to a financial scheme by a small circle of very rich men, countless people have suffered. Now one man intends to make the Wall Street moguls pay. He hovers on the edges of their social events, where their wives and daughters sport priceless jewels even as others in the city struggle just to survive. But our thief’s latest escapade has inadvertently turned into a kidnapping. When he tries to release the girl—an unhappy, madcap heiress—she decides she wants in on the action. And when a murderer enters the picture, the thief must defend himself against crimes far more serious than petty theft . . .

Originally published under the name Daphne Sanders, this inventive thriller by author Craig Rice, who is known for her “tough, wisecracking style,” mixes a vivid portrait of Great Depression–era New York with a twist-filled plot following a clever vigilante and the private detective trying to track him down (The New York Times).

This ebook features an introduction by Jeffrey Marks.

Craig Rice:
Craig Rice (1908–1957), born Georgiana Ann Randolph Craig, was an American author of mystery novels and short stories described as “the Dorothy Parker of detective fiction.” In 1946, she became the first mystery writer to appear on the cover of Time magazine. Best known for her character John J. Malone, a rumpled Chicago lawyer, Rice’s writing style was both gritty and humorous. She also collaborated with mystery writer Stuart Palmer on screenplays and short stories, as well as with Ed McBain on the novel The April Robin Murders.