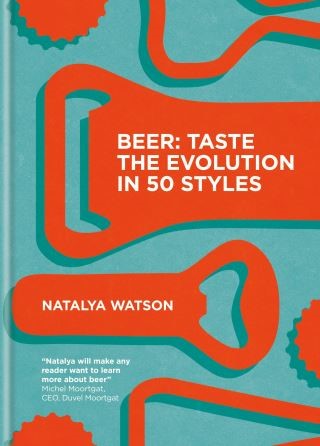 Beer: Taste the Evolution in 50 Styles

Beginning in the UK in the 1600s with smoky brown beer and ending with current areas of innovation, this fun and interactive guide moves through time and across the world to tell the stories behind some of today's best-known beer styles, including German lagers, stouts, porters, pilsner, IPA, sour beers and more.

Each chapter focuses on one of beer's key ingredients - malt, water, hops and yeast - sharing how, as each ingredient modernized over time, new flavours and styles emerged. With each change, Natalya offers a modern beer to try that will bring the section's story to life and help you truly taste the evolution of beer through the years.

With five centuries' worth of information, stories, and fun facts to discover and 50 beers to taste, Beer: Taste the Evolution in 50 Styles breathes new life into the exploration of one of the world's oldest and most enduring drinks.

Natalya Watson: Natalya studied microbiology at UCLA with a desire to save the world from infectious disease. She learned that while not the best at 'doing' science, she had a knack for making complex scientific concepts accessible and engaging for non-scientists. When she discovered the wide world of beer, she never looked back. Once qualified as a Certified Cicerone® and accredited Beer Sommelier, she began hosting educational talks and tastings for fellow beer-lovers in London to make sense of brewing science and giving people an even deeper appreciation for how their favourite beers are made. British-American, Natalya grew up in Northern Ireland before her family relocated to southern California. In 2015, she moved to London to pursue a career in beer, taking on the role of UK Marketing Manager for Duvel Moortgat for three years before going freelance. She regularly teaches at the Beer & Cider Academy, judges at beer competitions, and produces and hosts the podcast 'Beer with Nat'.