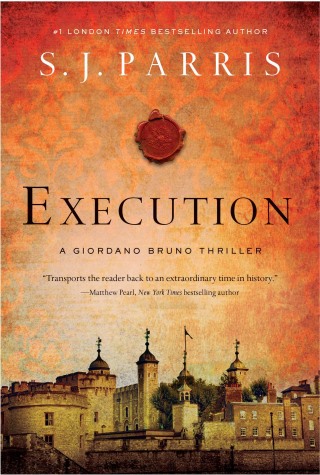 Giordano Bruno, a heretic turned spy, arrives in England with shocking information for spymaster Sir Francis Walsingham. A band of Catholic Englishmen are plotting to kill Queen Elizabeth and spring Mary Queen of Scots from prison to take the English throne in her place.

Bruno is surprised to find that Walsingham is aware of the plot—led by the young, wealthy noble Anthony Babington—and is allowing it to progress. He hopes that Mary will put her support in writing—and condemn herself to a traitor’s death.

Bruno is tasked with going undercover to join the conspirators. Can he stop them before he is exposed? Either way a queen will die; Bruno must make sure it is the right one.

S. J. Parris: S. J. Parris is the pseudonym of Stephanie Merritt. Since graduating from Cambridge, she has worked as a critic for a variety of newspapers and magazines as well as for radio and television. She is the author of five novels in the Giordano Bruno mystery series, including Treachery, Conspiracy, and Execution, all available from Pegasus Crime. Visit S. J. Parris at www.sjparris.com.