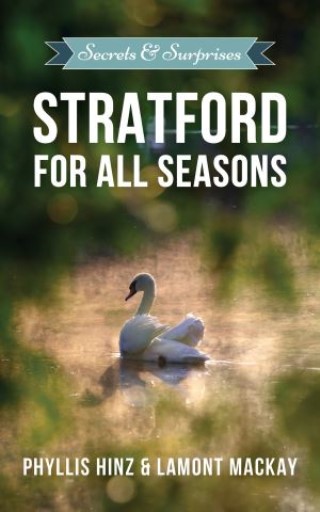 Stratford For All Seasons: Secrets & Surprises

Stratford For All Seasons, Secrets & Surprises, is loaded with magical and little-known stories about Stratford, Ontario. This quiet, scenic city in a rural setting has managed to stay true to its roots even though thousands of people visit each year from around the world. Many of the 500,000 annual visitors to this city of approximately 32,000 are not aware of the fun facts and history that make this corner of the universe unlike all the others. Stratford is not your pop-up tourist town. This book is about the things you can do, see, and discover in Stratford that will make you say, “Really?”

Phyllis Hinz: There is something magical about returning to a familiar place. A place where you were born and where your relatives have always lived. A place you move back to after many years away. The magic happens when you realize it’s the same place but delightfully different.Phyllis was born in Stratford and grew up in Perth County. As a child, she watched moving picture shows at the Avon, shopped at Shapiro’s Ladies Wear and Hudson’s, studied Shakespeare in school, and went to plays at the Festival Theatre. Recently, Phyllis attended an alternative theatre production — the story is in the book — at the Stratford Masonic Concert Hall. It was a trip down memory lane for her because she tap danced there when she was twelve.After high school, and a short career in banking — with a stint as a teller in Stratford — she groomed racehorses, worked at Disney World, attended Wilfrid Laurier University, and earned a degree in creative writing at the University of British Columbia, where she met Lamont Mackay in a writing course. Together, they travelled throughout Europe for nine months, owned five restaurants in the Kitchener-Waterloo area, explored Canada and the United States in a motorhome for nine years, and owned a test kitchen on the north shore of Lake Erie. Phyllis moved back to Stratford in 2018.Phyllis suggests you read Lamont’s bio for more details, to include them here would mean you’d read them twice. Lamont provides the particulars because she is the note-taker.|||Lamont is known as the note-taker. You will recognize her around Stratford as the person with the notepad and pen. With her travel-writer’s perspective and passion for adventure, she is astounded by the volume of things to see and do in her city.While teaching high school English in Surrey, British Columbia, Lamont was bitten by two life-altering bugs: food and travel. Travels in Europe with Phyllis Hinz led to an exciting culinary partnership, with restaurants and a catering company in St. Jacobs and Kitchener-Waterloo, Ontario. Short drives to Stratford to attend the Festival Theatre or to dine at the Church or Old Prune were escapes from the demands of entrepreneurship.After the sudden death of a business partner, Lamont and Phyllis were so devastated they sold their businesses and everything they owned to travel North America in a motorhome. During their nine-year vagabond lifestyle, they visited every state in the United States and every province and territory in Canada except Nunavut. Side trips included appearances on TV and a contract as Home Hardware’s Kitchen Experts.Lamont and Phyllis were branded “The Cooking Ladies” by the editor of a magazine in which they would write a culinary-travel column for twenty-five years. They have also coauthored ten cookbooks and have been published in newspapers and magazines across Canada and the United States.Lamont views life as an adventure whether panning for gold in the Yukon, tasting cod cheeks in Newfoundland and Labrador, judging World Food Championships in Alabama, or living in downtown Stratford.