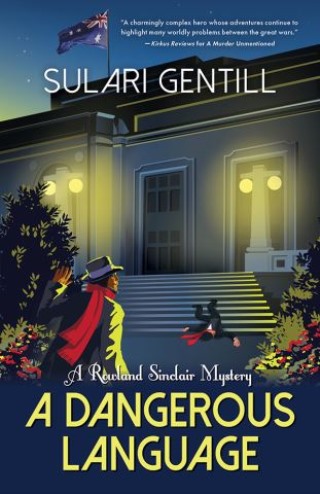 Words of peace are sometimes the most dangerous language of all

When Rowland Sinclair offers to fly internationally renowned Czech novelist and peace advocate Egon Kisch to Melbourne to kick off a speaking tour, he has no clue that the government has charged the Attorney General with preventing Kisch from stepping foot on Australian soil. Then Jim Kelly, a known Communist, is ruthlessly murdered on the Parliament House steps. It's soon evident that an extreme fascist group is also intent on keeping Kisch's words from ever reaching their countrymen's ears—even if they have to kill him, or anyone helping him gain entry.

Rowland, meanwhile, reconnects with his first love, who has returned after years abroad and seeks him out. When the two are photographed in flagrante delicto by reporters, Rowland fears he has ruined her reputation, and proposes marriage—despite the fact that his heart belongs to someone else...

Blending historical facts and figures with rollicking adventure, A Dangerous Language shows how far fanatics are willing to go to ensure that their side of the story is the only story people hear.

Sulari Gentill: After setting out to study astrophysics, graduating in law and then abandoning her legal career to write books, Sulari now grows French black truffles on her farm in the foothills of the Snowy Mountains of NSW. Sulari is author of The Rowland Sinclair Mystery series, historical crime fiction novels (eight in total) set in the 1930s. Sulari's A Decline in Prophets (the second book in the series) was the winner of the Davitt Award for Best Adult Crime Fiction 2012. She was also shortlisted for Best First Book (A Few Right Thinking Men) for the Commonwealth Writers' Prize 2011. Paving the New Road was shortlisted for another Davitt in 2013.