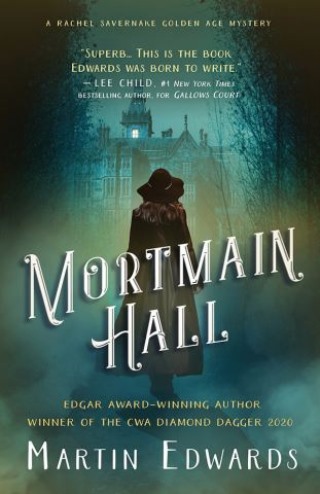 Next in the Rachel Savernake series, perfect for fans of the Golden age of mystery and readers of Anthony Horowitz and Sherry Thomas.

Framed for murder and with nowhere to go, Jacob Flint turns to an eclectic group of people on a remote estate to save him...

1930. A chilling encounter on London's Necropolis Railway leads to murder and a man escapes the gallows after a witness gives sensational evidence. After this string of strange, fatal events, journalist Jacob Flint discovers that he has been framed for murder. To save himself, he flees to Mortmain Hall, a remote estate on the northern coast. There, an eccentric female criminologist hosts a gathering of eclectic people who have all escaped miscarriages of cruel justice. This strange group puts Jacob a little on edge, but they may be his only hope to clear his name.

When a body is found beneath the cliffs near the house, it seems this gathering might be an ingenious plot to get away with murder. Are these eccentrics victims or are they orchestrators of the great deception? Jacob must now set out to uncover the labyrinthine of secrets within Mortmain Hall, alongside Rachel Savernake, woman whose relentless quest for the truth might just bring down the British establishment...

Martin Edwards: Martin Edwards is the recipient of the CWA 2020 Diamond Dagger Award for sustained excellence in his crime writing career and his significant contribution to the genre. His most recent novel, set in 1930, is Gallows Court. His seventh and most recent Lake District Mystery is The Dungeon House. Martin is also a well-known crime fiction critic, and series consultant to the British Library's Crime Classics. His ground-breaking study of the genre between the wars, The Golden Age of Murder, was warmly reviewed around the world, and won the Edgar, Agatha, H.R.F. Keating and Macavity awards. His The Story of Classic Crime in 100 Books has been nominated for five awards. A well-known commentator on crime fiction, he has edited 37 anthologies and published diverse non-fiction books, including a study of homicide investigation, Urge to Kill. An expert on crime fiction history, he is archivist of both the Crime Writers' Association and the Detection Club. He was elected eighth President of the Detection Club in 2015, is current Chair of the CWA, and posts regularly to his blog, 'Do You Write Under Your Own Name?'