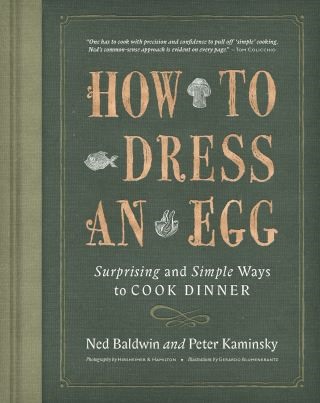 How to Dress an Egg

Learn to cook one thing exceptionally well and you open the door to a multitude of possibilities, with no need for special equipment or fussy techniques. That’s the premise of this book.

Ned Baldwin, a home cook who taught himself to be an excellent chef, sees no reason why anyone else can’t do the same. By showcasing one ingredient per method, Baldwin introduces all the skills a cook will ever need to prepare endless pleasurable meals. Get a big, beefy hit from a hanger steak by cooking it in the oven; master salad-making with leafy greens; grill fillets of sea bass for crispy skin and moist flesh; roast an explosively juicy chicken (the secret is to cook it on the floor of the oven); bake leeks to soft perfection; and more.

Each dish is elaborated on in different ways to expand the technique into unlikely, inventive recipes that are jumping-off points for endless creativity.