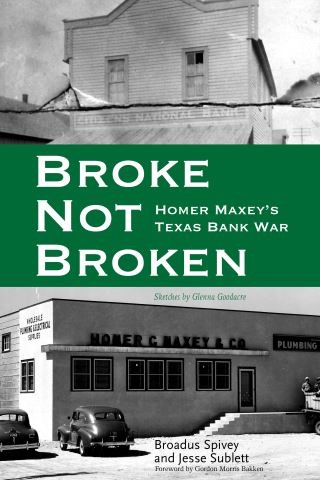 Homer Maxey was a war hero, multimillionaire, and pillar of the Lubbock, Texas, community. During the post-World War II boom, he filled the West Texas horizon with new apartment complexes, government buildings, hotels, banks, shopping centers, and subdivisions. On the afternoon of February 16, 1966, executives of Citizens National Bank of Lubbock met to launch foreclosure proceedings against Maxey. In a secret sale, more than 35,000 acres of ranch land and other holdings were divided up and sold for pennies on the dollar. By closing time, Maxey was penniless. Maxey sued the bank and every member of the board of directors, including long-time friends and business partners. Almost fifteen years, two jury trials, and nine separate appeals later, the case was settled on September 22, 1980. Broke, Not Broken, the story of this record-breaking, precedent-setting legal case, illuminates a community and a self-styled go-getter who refused to back down, even when his opponents were old friends, well-heeled leaders of the community, a bank backed by powerful Odessa oil men, and the most formidable attorneys in West Texas.

Broadus Spivey: Broadus Spivey has been practicing law for over fifty years. He currently lives in Austin but began his law career in Lubbock, where he was acquainted with many other principal figures involved in this book, including Homer Maxey himself.|||Jesse Sublett is a writer and musician in Austin. He has published numerous crime novels and nonfiction books and has written dozens of historical documentaries.