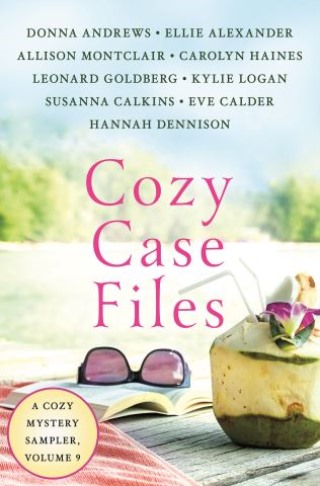 Looking for a new cozy series? In the new edition of Cozy Case Files, Minotaur Books compiles the beginnings of eleven charming cozy mysteries publishing in Spring/Summer 2020 for free for easy sampling.

The bonds of friendship are put to the test in The Devil’s Bones and Sugar and Vice. Two sisters inherit an old hotel in the remote Scilly Islands in series debut Death at High Tide. A new Meg Langslow mystery, The Falcon Always Wings Twice, finds the family at a Renaissance Faire.

Past crimes are unburied in Nothing Bundt Trouble and The Secret of Bones.

Go back in time with these next historical cozies. Sherlock Holmes’s daughter is back in The Art of Deception. In A Royal Affair, Princess Elizabeth has developed feelings for a Greek prince, and The Right Sort of Marriage Bureau is engaged to dig into the suitor’s past. Or visit a 1920’s Chicago speakeasy in The Fate of the Flapper.

Donna Andrews: Donna Andrews is the author of the Meg Langslow mysteries, including Stork Raving Mad and Swan for the Money. She has won the Agatha, Anthony, and Barry awards, a Romantic Times award for best first novel, and four Lefty and two Toby Bromberg Awards for funniest mystery. When not writing fiction, Andrews is a self-confessed nerd, rarely found away from her computer, unless she's messing in the garden. She lives in Reston, Virginia.|||ELLIE ALEXANDER is a Pacific Northwest native who spends ample time testing pastry recipes in her home kitchen or at one of the many famed coffeehouses nearby. When she's not coated in flour, you'll find her outside exploring hiking trails and trying to burn off calories consumed in the name of research. She is the author of the Bakeshop Mysteries, including Meet Your Baker and A Batter of Life and Death, as well as the Sloan Krause mysteries.|||ALLISON MONTCLAIR grew up devouring hand-me-down Agatha Christie paperbacks and James Bond movies. As a result of this deplorable upbringing, Montclair became addicted to tales of crime, intrigue, and espionage. She now spends her spare time poking through the corners, nooks, and crannies of history, searching for the odd mysterious bits and transforming them into novels of her own. The Right Sort of Man is her debut novel.|||Carolyn Haines is the USA Today bestselling author of the Sarah Booth Delaney mystery series and a number of other books in mystery and crime, including the Pluto's Snitch paranormal-historical mystery series, and Trouble, the black cat detective romantic suspense books. She is the recipient of the Harper Lee Award for Distinguished Writing, the Richard Wright Award for Literary Excellence, and the Mississippi Writers Guild Lifetime Achievement Award. She is a former journalist, bartender, photographer, farmhand, and college professor and lives on a farm where she works with rescue cats, dogs, and horses.|||HANNAH DENNISON was born and raised in Hampshire but spent more than two decades living in California. She has been an obituary reporter, antique dealer, private jet flight attendant and Hollywood story analyst. For many years Hannah taught mystery writing workshops at the UCLA Extension Writers’ Program in Los Angeles. In addition to the Island Sisters series, Hannah writes the Honeychurch Hall Mysteries and the Vicky Hill Mysteries both set in the wilds of the Devonshire countryside where she now lives with her two high-spirited Hungarian Vizslas.|||Leonard Goldberg is the USA Today bestselling author of the Joanna Blalock medical thrillers. His novels have been translated into a dozen languages and were selections of the Book of the Month Club, French and Czech book clubs, and The Mystery Guild. They were featured as People’s “Page-Turner of the Week” and at the International Book Fair. After a long career affiliated with the UCLA Medical Center as a Clinical Professor of Medicine, he now lives on an island off the coast of Charleston, SC.|||KYLIE LOGAN is the national bestselling author of the Jazz Ramsey Mysteries, The League of Literary Ladies Mysteries, the Button Box Mysteries, the Chili Cook-Off Mysteries, and the Ethnic Eats Mysteries.|||A Florida native, Eve Calder contends that cookies always taste better when you eat them at the beach. She is the author of the Cookie House Mystery series, including And Then There Were Crumbs and Sugar and Vice.|||Susanna Calkins directs faculty initiatives at the Searle Center for Advancing Learning and Teaching at Northwestern University, USA.