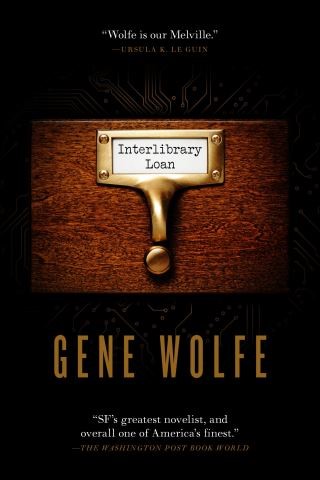 Interlibrary Loan is the brilliant follow-up to A Borrowed Man: the final work of fiction from multi-award winner and national literary treasure Gene Wolfe

Hundreds of years in the future our civilization is shrunk down but we go on. There is advanced technology, there are robots.

And there are clones.

E. A. Smithe is a borrowed person, his personality an uploaded recording of a deceased mystery writer. Smithe is a piece of property, not a legal human.

As such, Smithe can be loaned to other branches. Which he is. Along with two fellow reclones, a cookbook and romance writer, they are shipped to Polly’s Cove, where Smithe meets a little girl who wants to save her mother, a father who is dead but perhaps not.

And another E.A. Smithe… who definitely is.

Gene Wolfe (1931-2019) was the Nebula Award-winning author of The Book of the New Sun tetralogy in the Solar Cycle, as well as the World Fantasy Award winners The Shadow of the Torturer and Soldier of Sidon. He was also a prolific writer of distinguished short fiction, which has been collected in such award-winning volumes as Storeys from the Old Hotel and The Best of Gene Wolfe.

A recipient of the World Fantasy Award for Life Achievement, the Edward E. Smith Memorial Award, and six Locus Awards, among many other honors, Wolfe was inducted into the Science Fiction Hall of Fame in 2007, and named Grand Master by the Science Fiction and Fantasy Writers of America in 2012.