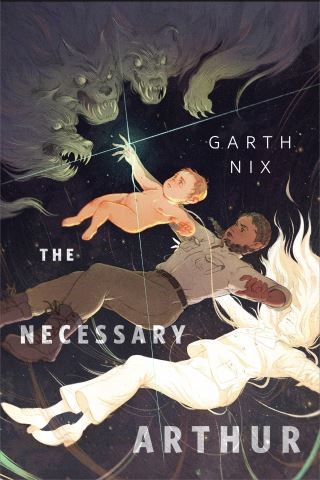 Some days you find out that the world is nothing like what you think it is.

An archaeologist named Tamara working near Hadrian’s Wall is approached by a very annoyed-looking, silver-haired woman with an incomprehensible message: The game is moving on, the time has come to play a hand, and Tamra is on point. Time to find the Necessary Arthur and get down to business!

Garth Nix: Garth Nix was born in 1963 in Melbourne, Australia. A full-time writer since 2001, he has worked as a literary agent, marketing consultant, book editor, book publicist, book sales representative, bookseller, and as a part-time soldier in the Australian Army Reserve. His books include the award-winning young adult fantasy novels Sabriel, Lirael, Abhorsen, Clariel, Goldenhand, and Angelmage; the dystopian novel Shade's Children; the space opera A Confusion of Princes; and a Regency romance with magic, Newt's Emerald. His fantasy novels for children include The Ragwitch; the six books of The Seventh Tower sequence; The Keys to the Kingdom series; Frogkisser!; the Troubletwisters series; Spirit Animals: Blood Ties; Have Sword, Will Travel and Let Sleeping Dragons Lie (with Sean Williams). He lives in a Sydney beach suburb with his wife and two children.