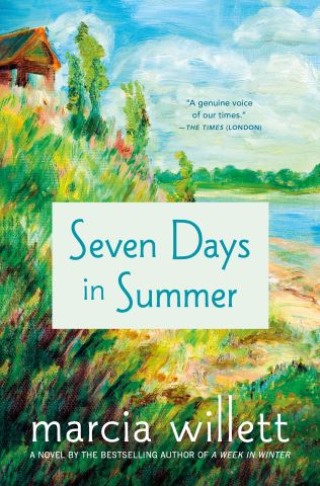 "For readers who like romantic and family-relationship tales on the frothy side, Willett’s latest is quite a dish."--Booklist

Seven Days in Summer is a sparkling novel about the love that brings family and friends to the same beach house year after year, and the secrets that may drive them apart.

A busy mom of twins, Liv is looking forward to a week at the Beach Hut—even if she feels that something's not right between her and Matt. She's sure he's just too busy at work to join them on their summer holiday, not that he wants time alone.

Baz, her father-in-law, loves having his family stay by the sea; but when an unexpected guest arrives, he finds himself torn between the past and the future.

Still reeling from a breakup, all Sofia wants is a quiet summer—until she meets Baz and her plans are turned upside-down.

And back home, Matt might be missing Liv and the children, but when an old friend appears he finds himself distracted. What does she know about his family's past that she's not letting on?

With this poignant family tale from the master of the ensemble, Marcia Willett's unforgettable characters will win the hearts of all readers.

Marcia Willett: Born in Somerset, in the west country of England, on the day the atom bomb was dropped on Hiroshima, Marcia Willett was the youngest of five girls. Her family was unconventional and musical, but Marcia chose to train as a ballet dancer. Unfortunately her body did not develop with the classical proportions demanded by the Royal Ballet, so she studied to be a ballet teacher. Her first husband was a naval officer in the submarine service, with whom she had a son, Charles, now married and training to be a clergyman. Her second husband, Rodney, himself a writer and broadcaster, encouraged Marcia to write novels. She has published several novels in England; A Week in Winter is the first to be published in the United States.