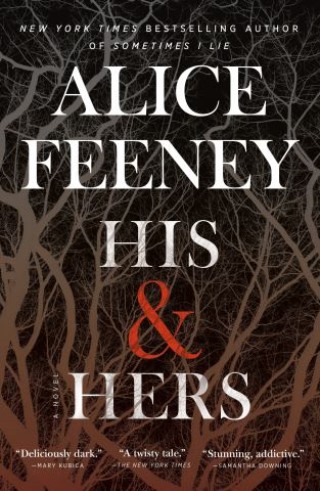 FROM THE NEW YORK TIMES BESTSELLING AUTHOR OF Sometimes I Lie
“Stunning. Addictive. This book should not be missed!” —Samantha Downing
“Deliciously dark…will have readers tearing through the pages.” —Mary Kubica
“Gives Gone Girl a run for its money…I couldn’t stop reading.” —Christina Dalcher
There are two sides to every story: yours and mine, ours and theirs, His & Hers. Which means someone is always lying.

When a woman is murdered in Blackdown, a quintessentially British village, newsreader Anna Andrews is reluctant to cover the case. Detective Jack Harper is suspicious of her involvement, until he becomes a suspect in his own murder investigation.

Someone isn’t telling the truth, and some secrets are worth killing to keep.

His & Hers is a twisty, smart, psychological thriller. A gripping tale of suspense, told by expertly-drawn narrators that will keep readers guessing until the very end.

“For the ultimate rollercoaster reading experience this year, look no further than His & Hers by Alice Feeney.” —Woman & Home

Alice Feeney: ALICE FEENEY is a writer and journalist. She spent fifteen years with BBC News where she worked as a reporter, news editor, arts and entertainment producer, and One O'Clock news producer. Alice has lived in London and Sydney and has now settled in the Surrey countryside, where she lives with her husband and dog. His & Hers is her third novel, after Sometimes I Lie and I Know Who You Are.