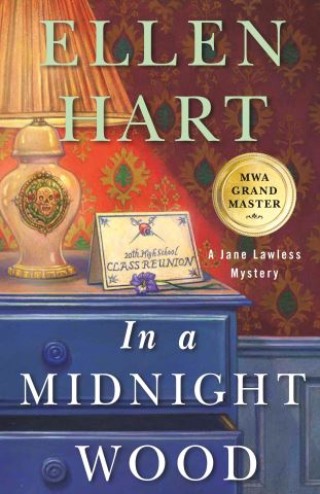 In a Midnight Wood

Minnesota private investigator Jane Lawless is headed on a little getaway. She and her best friend, Cordelia Thorn, plan to visit their old friend Emma in her hometown of Castle Lake, while also participating in the small town's local art festival. Between the festival and an upcoming high school reunion for the class of 1999, no one in Castle Lake is quite sure who will make an appearance.

But back in 1999, Emma's boyfriend and Castle Lake high school senior Sam Romilly went missing. Everyone thought he ran away, though the town rumor mill has always claimed his father murdered him. Today, within a week of his class's 20th reunion, Sam’s remains are found in someone else's burial plot. Suddenly the case is warming up fast. People who knew Sam—friends and enemies alike—will be in town for the much anticipated reunion. It’s up to Jane to sort the innocent from the guilty, before it's too late.

Ellen Hart: ELLEN HART, named the 2017 Mystery Writers of America’s Grandmaster, is the author of more than thirty mysteries, many of them featuring private investigator Jane Lawless. Entertainment Weekly has called her “a top novelist in the cultishly popular gay mystery genre.” She has won multiple Minnesota Book Awards, and has been nominated twenty-three times for the Lambda Literary Award, winning six. She lives in Minneapolis, Minnesota, with her partner of forty years.