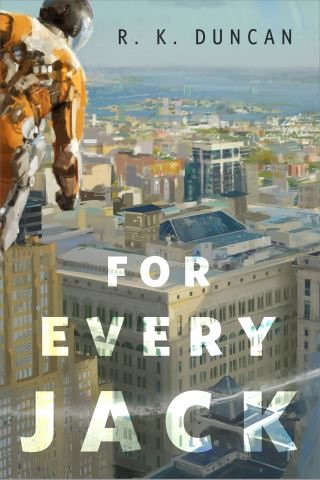 In R.K. Duncan's "For Every Jack," a Tor.com Original short story, humanity has settled space and left Earth to its destruction.

Connor and Ines have traveled back to Earth on a preservation project to find the human “jacks” that sacrificed their bodies to prop up the United States’s failing infrastructure. But the jacks hold a secret, one Connor would rather keep hidden than risk the truth being made public.

R. K. Duncan: R. K. Duncan is a queer polyamorous wizard and author of fantasy, horror, and occasional sci-fi. He writes from a few rooms of a venerable West Philadelphia row home, where he dreams of travel and the demise of capitalism. In the shocking absence of any cats, he lavishes spare attention on cast iron cookware and his long-suffering and supportive partner. Before settling on writing, he studied linguistics and philosophy at Haverford college. He attended Viable Paradise 23 in 2019.