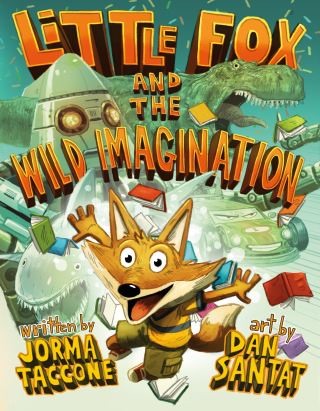 Little Fox and the Wild Imagination

This is a collaboration beyond your wildest imagination! Jorma Taccone, from the hit comedy trio The Lonely Island, has paired up with New York Times–bestselling, Caldecott Medal–winning illustrator Dan Santat to create a picture book about time, space, and giant-robot-squids.

This is a tale of great caution, terror, and destruction . . .

of bath time, and bedtime, and the battle in between.

This is the story of Little Fox and one VERY BIG imagination.

Everyone from Amy Poehler, Maya Rudolph and Seth Meyers to music legend Weird Al Yankovic and Tony award-winning playwright Tony Kushner loves Little Fox and the Wild Imagination. Can you imagine that?

Jorma Taccone: Jorma Taccone is a comedian, director, and writer. He is one-third of the comedy group The Lonely Island with Akiva Schaffer and Andy Samberg. Jorma has an Emmy, multiple Writers Guild Awards, and a Peabody, which he does not think he deserves. Born in Berkeley, California, he now lives in New York City with his wife, Marielle, and their son, Wylie. Little Fox and the Wild Imagination is his first picture book.