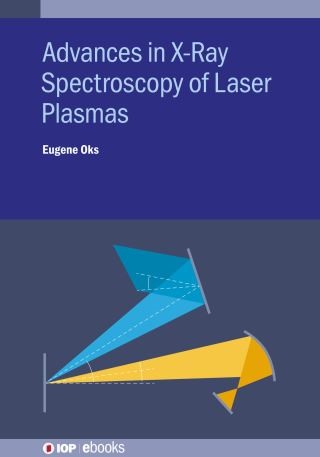 This book presents advances in X-ray spectroscopy of plasmas interacting with a laser radiation and laser-induced plasmas. This research is practically important for the quest for the controlled nuclear fusion, for studying matter under extreme conditions, for providing atomic reference data, for laboratory modelling of physical processes in astrophysical objects, and for a better understanding of intense laser-plasma interactions.

Advances in X-Ray Spectroscopy of Laser Plasmas significantly expands the scope of practical applications of X-ray spectroscopy of laser plasmas compared to traditional X-ray diagnostics of laser plasmas. The recent advances presented in this text make it possible to study the development of Langmuir waves, ion acoustic waves, transverse electromagnetic waves, parametric decay instabilities, as well as the rates of charge exchange between multicharged ions.

Eugene Oks has founded and developed new research fields such as intra-Stark spectroscopy (a new class of nonlinear optical phenomena in plasmas), masing without inversion (advanced schemes for generating/amplifying coherent microwave radiation), and quantum chaos (nonlinear dynamics in the microscopic world). He is the Chief Editor of the journal International Review of Atomic and Molecular Physics and has published more than 450 papers as well as seven books.