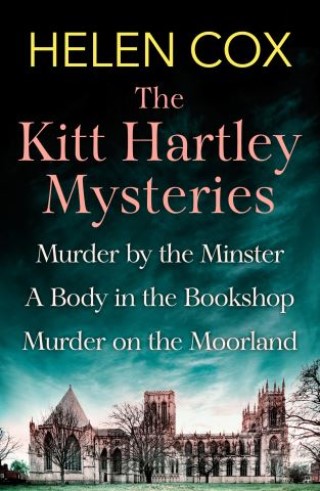 Murder by the Minster, A Body in the Bookshop and Murder on the Moorland

The Kitt Hartley Mysteries: the first three books in the charming cozy crime series from Helen Cox, perfect for fans of Betty Rowlands or Faith Martin.

Murder by the Minster (Book 1)

It's a perfectly normal day for Kitt Hartley at her job at the University of the Vale of York library, until Detective Inspector Halloran arrives at her desk to tell her that her best friend, Evie Bowes, is under suspicion of murder. Evie's ex-boyfriend Owen has been found dead - with a fountain pen stabbed through his heart - and all the evidence points to her.

Kitt knows there is no way Evie could murder anyone - let alone Owen, who she adored. Horrified that the police could have got it so wrong, Kitt decides there's only one thing to do: she's going to investigate Owen's murder herself. She's read hundreds of mystery novels - how hard can it be?

A Body in the Bookshop (Book 2)

When DS Charlotte Banks is suspended from the police on suspicion of assaulting a suspect in the burglary of a local bookshop, librarian Kitt Harley and her friend Evie Bowes refuse to believe she is guilty. But why is she being framed?

With Charlotte's boss DI Malcolm Halloran unable to help, Evie decides to take matters into her own hands. Kitt takes little persuading to get involved too - after all, as well as Charlotte's career to save, there are missing books to be found!

Then the discovery of a body raises the stakes even higher. For Evie, and now Kitt, this case is as personal as it gets. Can they catch the murderer in time to turn a bleak midwinter into something merry and bright?

Murder on the Moorland (Book 3)

Kitt Hartley wakes to the news that a murder has been committed in Irendale, a village high on the wild Yorkshire moors where her boyfriend, DI Malcolm Halloran, lived with his ex-wife until she too, was murdered. The MO of the two crimes is identical, right down to the runic symbols carved into the victims' hands.

Unable to leave it to the local police to solve, Kitt and Halloran travel to Irendale, where a literary mystery awaits. A line of Anglo-Saxon poetry found on the victim leads to a hiding place, and another cryptic clue. What is the connection to the murder of Halloran's wife all those years ago?

Helen Cox is a Yorkshire-born novelist and poet. After completing her MA in creative writing at the York St John University, Helen wrote for a range of publications, edited her own independent film magazine and penned three non-fiction books. Helen currently lives by the sea in Sunderland, where she writes poetry, romance novellas, the Kitt Hartley Yorkshire Mystery Series and hosts The Poetrygram podcast.

Helen's Mastermind specialism would be Grease 2 and to this day she adheres to the Pink Lady pledge. More information about Helen can be found on her website: helencoxbooks.com, or on Twitter: @Helenography.