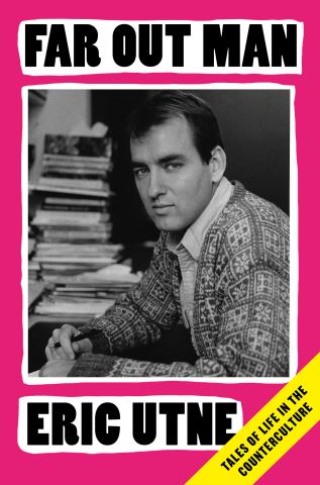 Tales of Life in the Counterculture

The founder of Utne Reader chronicles his adventures on the frontlines of American culture—from the Vietnam era to the age of Trump—as a spiritual seeker, antiwar activist, and minor media celebrity.

“Fascinating . . . a remarkable piece of social history.”—Bill McKibben, author of Falter: Has the Human Game Begun to Play Itself Out?

Far Out Man is the story of a life-long seeker who was occasionally a finder as well. In 1984, Eric Utne founded Utne Reader, a digest of new ideas and fresh perspectives percolating in the arts, culture, politics, business, and spirituality. With the tag line “The Best of the Alternative Press,” the magazine was twice a finalist for a National Magazine Award and grew to more than 300,000 paid circulation. In the nineties, the magazine promoted the Neighborhood Salon Association to revive the endangered art of conversation and start a revolution in people’s living rooms. More than 18,000 people joined, comprising nearly 500 salons across North America. Utne devoted the magazine to bringing people together to help make the world a “little greener and a little kinder.”

Far Out Man serves as a chronicle of both an individual life and a generation, covering the conflicts of the Vietnam era, the hopes and excesses of the sexual revolution and the Me Decade, the idealism and depredations of the entrepreneurial eighties and nineties, and the promise and perils of the digital age. Ultimately, Far Out Man is the story of Eric Utne’s lifelong search for hope, how he lost it, and what he found on the other side that sustains him in his darkest moments. It is a book dedicated to helping all seekers become finders.

Eric Utne: Eric Utne, founder of the eponymous Utne Reader, is a journalist, publisher, and social entrepreneur. His name has been a New York Times crossword puzzle answer more than seventy times since 1994. Prior to starting Utne Reader, Utne managed a natural foods store, studied acupuncture and Chinese medicine, and was a literary agent and small business consultant. After leaving the magazine in 2000, he became the seventh-grade class teacher in an inner-city Waldorf school. In 2006, he was elected to the executive committee of the Nobel Peace Prize Forum. He is a senior fellow at the University of Minnesota’s Center for Spirituality and Healing, where he co-authored a series of courses on the social and environmental dimensions of health and well-being. Utne earned a bachelor’s degree in environmental design from the University of Minnesota. He is the father of four and grandfather of five, and makes his home in St. Paul, Minnesota.