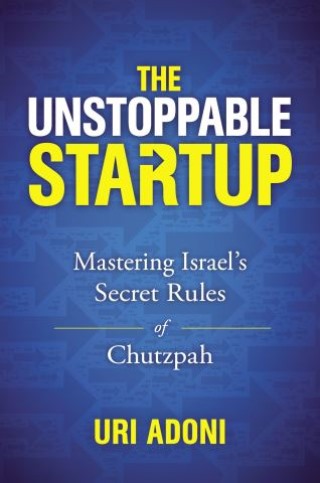 THE BOLD SECRET TO SUCCESSFUL STARTUPS

Veteran venture capitalist Uri Adoni shares the secrets to Israel’s incredible track record of success in this new guide that will help make any startup unstoppable.

More than half of all startups fail—often during the crucial early stages of development when they need to prove their viability on a limited budget. But when it comes to startup success, one country stands out: Israel. Even though it is a relatively small country with a population of just over 9 million inhabitants, Israel has one of the highest concentrations of startups in the world, has the highest venture capital per capita, is one of the top countries in terms of number of companies listed on NASDAQ, and is well recognized as a global leader in research and development.

In The Unstoppable Startup, Uri Adoni goes behind the scenes to explain the principles and practices that can make any startup, anywhere in the world, become an unstoppable one.

Packed with insider accounts from leaders who have realized bold visions, The Unstoppable Startup distills Israeli chutzpah into six operational rules that will help you to:

Far from mere conjecture, Adoni implemented these practices throughout his more than 12 years as a venture capitalist for one of Israel's most successful venture funds, and he continues to utilize these same proven startup strategies today in metropolitan areas in the US.

Uri Adoni has over 20 years experience in high-tech and over 12 years of being a partner at Jerusalem Venture Partners Media Labs (www.jvpvc.com). JVP has listed twelve companies on NASDAQ and sold numerous others to leading tech companies such as Cisco, Microsoft, EMC, PayPal, Sony, Broadcom, AUO, Alcatel, and many more. Adoni served on the board of several JVP companies, early and late stage ones, and is also on the board of SifTech, one of Israel’s leading accelerators, and Takwin, an impact venture capital firm that focuses on investing in Israeli-Arab entrepreneurs. Prior to joining JVP, Uri was the CEO of MSN Israel (Microsoft Networks) and was one of Israel's new media pioneers. In his military service at the IDF (regular and reserve), he was an officer (major) and served as a commander of a combat unit.

Uri recently departed from JVP in order to join a US-based real estate entrepreneur, who is developing a new and innovative approach for building local high-tech ecosystems and communities across the US.