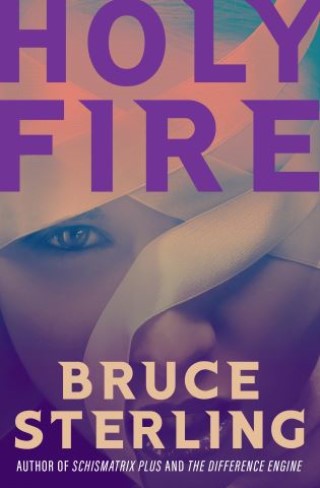 Memory, morality, and immortality merge in this “haunting and lyrical triumph” from the bestselling author of Schismatrix Plus (Time).

In the late twenty-first century, technology has lengthened lifespans far beyond what was once medically possible. Existence itself has become relatively easy—if boring. In this futuristic paradise, ninety-four-year-old Mia Ziemann longs for something different and undergoes a radical new treatment that restores both her body and mind to that of a twenty-year-old. After her dramatic transformation, Mia finds herself lost in an avant-garde world of passion, designer drugs, and creative expression . . .

“Ideas—big ideas—lurk beneath Mia’s romp through Sterling’s delightfully imagined newly post-human Earth. Art, artifice, the pursuit of immortality, and youth and aging bounce around the story, the characters, and their conversations in imaginative, engaging fashion. . . . In the end, Holy Fire is one of the most interesting, imaginative, and subtly humorous—and relevant for it—novels the cyberpunk/post-human era has produced. . . . Holy Fire may very well be [Sterling’s] best work.” —Speculiction

“An intellectual feat, it is also a treat for the spirit and the senses.” —Wired

“The future Sterling traces is plausible and provocative, particularly his consideration of several contrasting cultures, and of the disenfranchised who are unable to become ‘post-human.’ Those interested in serious speculative conversation set within a very strange near-future will find this much to their taste.” —Publishers Weekly

Bruce Sterling:
Bruce Sterling is an American author and one of the founders of the cyberpunk science fiction movement. He began writing in the 1970s; his first novel, Involution Ocean, about a whaling ship in an ocean of dust, is a science fictional pastiche of Herman Melville’s Moby-Dick. His other works, including his series of stories and a novel, Schismatrix, set in the Shaper/Mechanist universe, often deal with computer-based technologies and genetic engineering. His five short story collections and ten novels have earned several honors: a John W. Campbell Award, two Hugo Awards, a Hayakawa’s SF Magazine Reader’s Award, and an Arthur C. Clarke Award. Sterling has also worked as a critic and journalist, writing for Metropolis, Artforum, Icon, MIT Technology Review, Time, and Newsweek, as well as Interzone, Science Fiction Eye, Cheap Truth, and Cool Tools. He edits Beyond the Beyond, a blog hosted by Wired.

Sterling is also involved in the technology and design community. In 2003 his web-only art piece, Embrace the Decay, was commissioned by the Museum of Contemporary Art, Los Angeles, and became the most-visited piece in the museum’s digital gallery. He has taught classes in design at the Gerrit Reitveld Academie in Amsterdam, Centro in Mexico City, Fabrica in Treviso, Italy, and the Art Center College of Design in Los Angeles. Sterling lives in Austin, Texas; Belgrade, Serbia; and Turin, Italy.