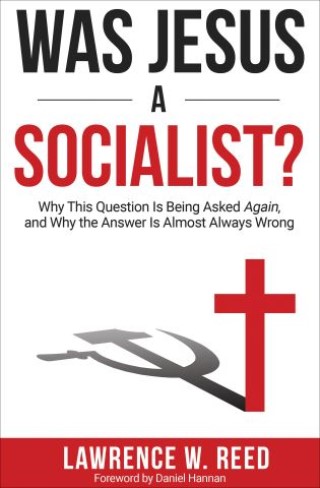 Was Jesus a Socialist?

Why This Question Is Being Asked Again, and Why the Answer Is Almost Always Wrong

Economist and historian Lawrence W. Reed has been hearing people say “Jesus was a socialist” for fifty years. And it has always bothered him.

Now he is doing something about it.

Reed demolishes the claim that Jesus was a socialist. Jesus called on earthly governments to redistribute wealth? Or centrally plan the economy? Or even impose a welfare state?

Point by point, Reed answers the claims of socialists and progressives who try to enlist Jesus in their causes. As he reveals, nothing in the New Testament supports their contentions.

Was Jesus a Socialist? could not be more timely. Socialism has made a shocking comeback in America. Poll after poll shows that young Americans have a positive image of socialism. In fact, more than half say they would rather live in a socialist country than in a capitalist one.

And as socialism has come back into vogue, more and more of its advocates have tried to convince us that Jesus was a socialist.

This rhetoric has had an impact. According to a 2016 poll by the Barna Group, Americans think socialism aligns better with Jesus’s teachings than capitalism does. When respondents were asked which of that year’s presidential candidates aligned closest to Jesus’s teachings, a self-proclaimed “democratic socialist” came out on top. Sure enough, the same candidate earned more primary votes from under-thirty voters than did the eventual Democratic and Republican nominees combined.

And in a 2019 survey, more than seventy percent of millennials said they were likely to vote for a socialist.

Was Jesus a Socialist? expands on the immensely popular video of the same name that Reed recorded for Prager University in July 2019. That video has attracted more than four million views online.

Ultimately, Reed shows the foolishness of trying to enlist Jesus in any political cause today. He writes: “While I don’t believe it is valid to claim that Jesus was a socialist, I also don’t think it is valid to argue that he was a capitalist. Neither was he a Republican or a Democrat. These are modern-day terms, and to apply any of them to Jesus is to limit him to but a fraction of who he was and what he taught.”

Lawrence W Reed: Lawrence W. Reed is president emeritus of the Foundation of Economic Education (FEE) and the author or editor of several books, including Excuse Me, Professor: Challenging the Myths of Progressivism and Real Heroes: Inspiring True Stories of Courage, Character, and Conviction (ISI Books). Prior to joining FEE in 2008, he served for twenty years as president of the Mackinac Center for Public Policy. He also taught economics full-time for nearly a decade. A frequent guest on radio and television, Reed has written thousands of articles and delivers dozens of speeches each year. He has received the Alumni Achievement Award from his alma mater, Grove City College.