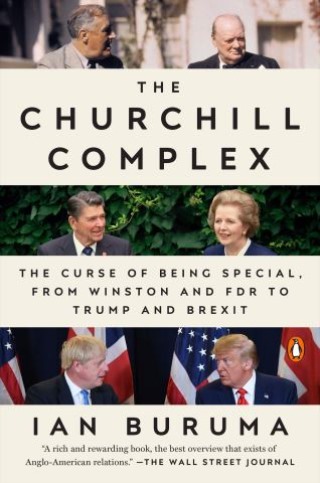 The Curse of Being Special, from Winston and FDR to Trump and Brexit

From one of its keenest observers, a brilliant, witty journey through the "Special Relationship" between Britain and America that has done so much to shape the world, from World War II to Brexit.

It's impossible to understand the last 75 years of American history, through to Trump and Brexit, without understanding the Anglo-American relationship, and specifically the bonds between presidents and prime ministers. FDR of course had Churchill; JFK famously had Macmillan, his consigliere during the Cuban Missile Crisis. Reagan found his ideological soul mate in Thatcher, and George W. Bush found his fellow believer, in religion and in war, in Tony Blair. And now, of course, it is impossible to understand the populist uprising in either country, from 2016 to the present, without reference to Trump and Boris Johnson, though ironically, they are also the key to understanding the special relationship's demise.

There are few things more certain in politics than that at some point, facing a threat to national security, a leader will evoke Winston Churchill to stand for brave leadership (and Neville Chamberlain to represent craven weakness). As Ian Buruma shows, in his dazzling short tour de force of storytelling and analysis, the mantle has in fact only grown more oppressive as nuanced historical understanding fades and is replaced by shallow myth. Absurd as it is to presume to say what Churchill would have thought about any current event, it's relatively certain he would have been horrified by the Iraq War and Brexit, to name two episodes dense with "Finest Hour" analogizing.

But The Churchill Complex is much more than a reflection on the weight of Churchill's legacy and its misuses. At its heart is a series of shrewd and absorbing character studies of the president-prime minster dyads, which in Ian Buruma's gifted hands serve as a master class in politics, diplomacy and abnormal psychology. It's never been a relationship of equals: from Churchill's desperate cajoling and conniving to keep FDR on side in the war on, British prime ministers have put much more stock in the relationship than their US counterparts did. For England, resigned to the loss of its once-great empire and the diminishment of its power, its close kinship to the world's greatest superpower would give it continued relevance, and serve as leverage to keep continental Europe in its place. As Buruma shows, this was almost always fool's gold. And now, even as the links between the Brexit vote and the 2016 US election are coming into sharper focus, the Anglo-American alliance has floundered on the rocks of the isolationism that is one of 2016's signal legacies. The Churchill Complex may not have a happy ending, but as with Ian Buruma's other works, piercing lucidity and elegant prose is its own form of lasting comfort.

Ian Buruma: Ian Buruma teaches at Bard College. His books include A Tokyo Romance, Their Promised Land, Year Zero, The China Lover, Murder in Amsterdam, Occidentalism, God’s Dust, Behind the Mask, The Wages of Guilt, Bad Elements, and Taming the Gods.