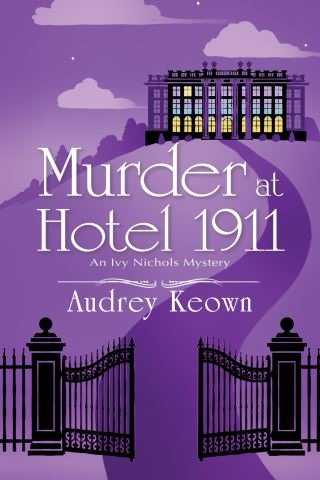 If you want to spend a night amid the luxury and charm of the early 20th century, book a room at Hotel 1911. You'll find 28-year-old Ivy Nichols behind the reception desk. The hotel is Ivy's only link to the family that abandoned her when she was a small child. Now, plagued by panic attacks, she pedals her sea-green Schwinn bicycle to work every evening, hoping desperately to hold on to her job.

When wealthy, imperious Ms. Swain arrives at the hotel and belittles Ivy, the young woman seeks consolation in the welcoming kitchen of George, the hotel's chef. Despite her tormentor's barbs, she dutifully informs George that Ms. Swain has a deadly allergy to shellfish. So when Ms. Swain collapses at dinner and dies, the police suspect that the chef made a tragic, inexcusable error. Desperate to save George's career, Ivy sets out sleuthing. She learns that numerous people in and around the hotel had motives to contaminate Ms. Swain's plate. Among them are Jeffrey Swain, the victim's son and heir; painter Rose Jewett; and British expat Hemal Sandeep.

Even after the police find traces of shellfish in George's kitchen, Ivy is determined to clear her friend's name. But the stress of the investigation, in a hotel filled with suspects, threatens to precipitate another terrifying panic attack...or something more deadly.

Audrey Keown: Audrey Keown set her mystery series in Chattanooga, Tennessee, the place she calls home. She lost her heart to the city in the early days of its downtown revival, and its bridges, coffee shops, breweries, parks, and people are its mixtape back to her. For ten years she wrote professionally for Chatter magazine and the Chattanooga Times Free Press, which sharpened her storytelling skills for cutting into fiction writing. Themes of redemption and connection to history often find their way into her work. Like her protagonist, she has battled anxiety and writes about mental illness in her fiction in hopes of helping lift the stigma. This is her first book.