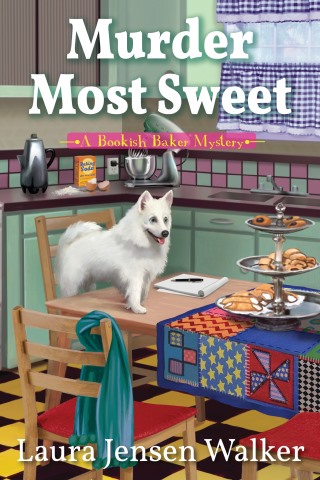 In this series debut for fans of Jenn McKinlay, baker Teddie St. John spends her time away from the oven writing murder mysteries. But is she herself a murderer?

Everyone in Lake Potawatomi, Wisconsin, knows Teddie St. John. Tall, curly-haired Teddie is a superb baker, a bohemian bon vivant, and a mystery writer. Teddie is walking her American Eskimo dog, Gracie, when her four-legged friend finds Teddie's missing silk scarf. Only problem: the scarf is tied tightly around the neck of a beautiful blond woman, the fiancée of a touring British author.

Before you can say "Wisconsin kringle," Teddie becomes a murder suspect. Everyone in town knows all too well that the distinctive scarf was hers. But there are more layers to this case than there would have been on poor Kristi's wedding cake. Tavish Bentley should be bereaved after his sweetheart's strangling. Instead, the dashing Brit takes a shine to Teddie's witty wisecracks and to-die-for cookies, and soon he's mooning over her instead of mourning his bride. That is, when he's not dodging the attentions of Annabelle, an obsessive fan who's taken to stalking him.

And when a second murder shocks the community, the plot thickens to the consistency of fondant as Teddie stands accused of not one, but two, murders. With the help of her friends Sharon and Char, can Teddie clear her name and deliver a killer's just desserts?

Laura Jensen Walker: Laura Jensen Walker has loved mysteries ever since she read Trixie Belden in the fourth grade in her Danish-founded hometown of Racine, Wisconsin--America's kringle capital. A former journalist and the author of several novels and humorous non-fiction books, including Thanks for the Mammogram! Laura, like her main character, chose to go flat after her second mastectomy and is grateful to be a longtime breast cancer survivor. She lives in California with her Renaissance-man husband and their canine-daughter Mellie.