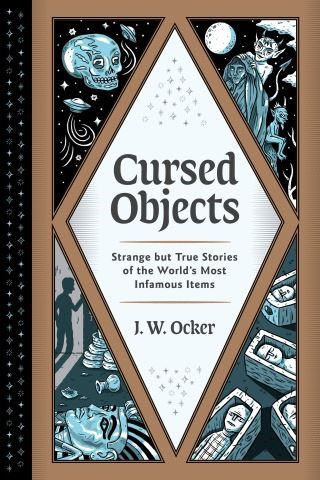 Strange but True Stories of the World's Most Infamous Items

Beware...this book is cursed! These strange but true stories of the world’s most infamous items will appeal to true believers as well as history buffs, horror fans, and anyone who loves a good spine-tingling tale.

They’re lurking in museums, graveyards, and private homes. Their often tragic and always bizarre stories have inspired countless horror movies, reality TV shows, novels, and campfire tales. They’re cursed objects, and all they need to unleash a wave of misfortune is . . . you.

Many of these unfortunate items have intersected with some of the most notable events and people in history, leaving death and destruction in their wake. But never before have the true stories of these eerie oddities been compiled into a fascinating and chilling volume. Inside, readers will learn about:

• Annabelle the Doll, a Raggedy Ann doll that featured in the horror franchise The Conjuring
• The Unlucky Mummy, which is rumored to have sunk the Titanic and kick-started World War I
• The Dybbuk box, which was sold on eBay and spawned the horror film The Possession
• The Conjured Chest, which has been blamed for fifteen deaths within a single family
• The Ring of Silvianus, a Roman artifact believed to have inspired J. R. R. Tolkien’s The Hobbit
• And many more!

J. W. Ocker: J. W. Ocker is a travel writer, novelist, and blogger. He is the author of the Edgar Award winning and Anthony Award nominated book Poe-Land. His other books include A Season with the Witch, The New England Grimpendium, and The New York Grimpendium. His writing can be found in the Boston Globe, the Atlantic, Atlas Obscura, and the Guardian, among other publications. He is also the creator of the blog and podcast OTIS: Odd Things I’ve Seen, where he chronicles his visits to oddities around the world. He has personally handled dozens of cursed objects yet miraculously lived to tell the tale.