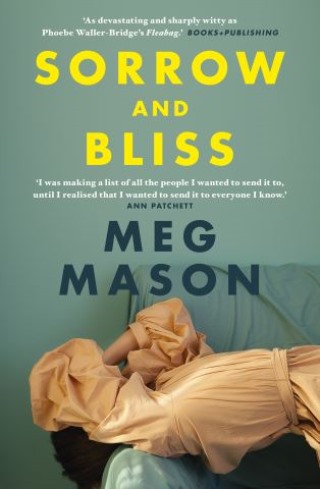 Spiky, sharp, intriguingly dark and tender, full of pathos, fury and wit, Sorrow and Bliss by Meg Mason is a dazzling, distinctive novel from a boldly talented writer. For fans of Sally Rooney, Taffy Brodesser-Akner and Fleabag.

''I just adored this book. It's timely and dark and poignant and funny. It was filled with such eviscerating compassion and rage; I couldn't get enough of it. I inhaled it in a single weekend, unable to put it down. Meg Mason is a searing talent.' Kate Leaver, The Friendship Cure

This novel is about a woman called Martha. She knows there is something wrong with her but she doesn't know what it is. Her husband Patrick thinks she is fine. He says everyone has something, the thing is just to keep going.

Martha told Patrick before they got married that she didn't want to have children. He said he didn't mind either way because he has loved her since he was fourteen and making her happy is all that matters, although he does not seem able to do it.

By the time Martha finds out what is wrong, it doesn't really matter anymore. It is too late to get the only thing she has ever wanted. Or maybe it will turn out that you can stop loving someone and start again from nothing - if you can find something else to want.

The book is set in London and Oxford. It is sad and funny.

'This is a romance, true, but a real one ... as devastating and sharply witty as Phoebe Waller-Bridge's Fleabag.' Books+Publishing

Meg Mason began her career at the Financial Times and The Times of London. Her work has since appeared in The Sunday Times, The Sydney Morning Herald and The Sunday Telegraph. She has written humour for The New Yorker and Sunday STYLE, monthly columns for GQ and InsideOut and is now a regular contributor to Vogue, ELLE, Stellar and marie claire.  Her first book, a memoir of motherhood, Say It Again in a Nice Voice (HarperCollins) was published in 2012.  Her second, a novel, You Be Mother (HarperCollins) was published in August 2017. She lives in Sydney with her husband and two daughters.