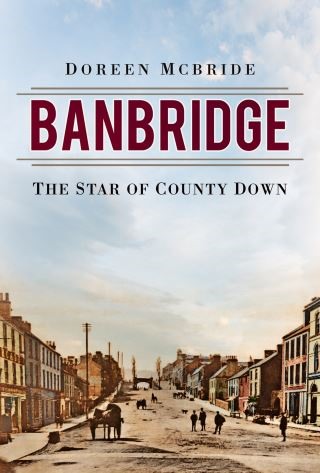 The Star of County Down

Banbridge gets its name from the bridge built across the River Bann in 1712. It’s a thriving modern town, rife with history and culture, surrounded by beautiful scenery that provided an iconic location for the internationally acclaimed television series Game of Thrones. It’s the setting of the well-known folk song ‘The Star of the County Down’, contains Europe's first flyover bridge and an ancient church founded by St Patrick himself.Travel from Ballievey along the Lower Bann, discover ancient Celtic sites, the remains of old linen mills and a Second World War aeroplane factory. Look, too, for the famous names attached to Banbridge, including Ernest Walton, the first person to see an artificially split atom; F.E. McWilliam, the renowned sculptor; and Captain Francis Crozier, the explorer who discovered the North West Passage.

Doreen McBride: DOREEN MCBRIDE is Banbridge Historical Society’s press officer and has served, in several capacities, on the executive committee of the Federation of Ulster Local Studies. She has been president of the Association of Northern Ireland Education and Library Boards, and spent a year in the Ulster Folk and Transport Museum as a teacher on secondment. She has had books published by Longmans, Poolbeg Press, The Ulster Folk and Transport Museum, BQ Publications, Adare Press and The History Press Ireland. She lives in Banbridge.