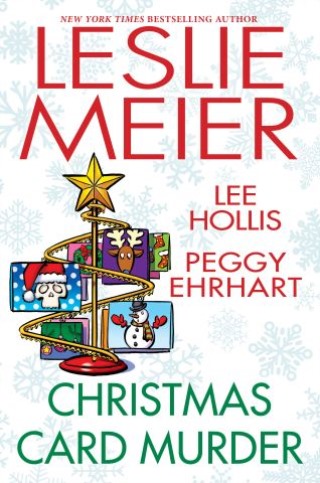 Everyone dreams of a picture-perfect small-town Christmas, but when murder is in the cards, some holiday greetings are addressed to kill . . .

CHRISTMAS CARD MURDER by LESLIE MEIER
In the midst of holiday home renovations, Lucy Stone accidentally unwraps a murder mystery decades in the making when she discovers an old Christmas card with a nasty message belonging to one of her farmhouse’s previous residents. The case may be colder than a New England Christmas, but Lucy’s determined to sort it out before Santa comes to town.

DEATH OF A CHRISTMAS CAROL by LEE HOLLIS
The Island Times Christmas soiree gets off to a scroogey start when Hayley Powell, Mona Barnes, and Rosana Moretti receive a Christmas card from the town flirt, Carol Waterman, who threatens to run off with one of their husbands! The ladies chalk it up to an imprudent prank . . . until they find Carol mistletoe-up under her tree . . .

DEATH OF A CHRISTMAS CARD CRAFTER by PEGGY EHRHART
Slay bells ring when the body of Arborville High School’s beloved art teacher (and annual Christmas card designer), Karma Karling, is discovered on the first day of the Holiday Craft Fair. Now, Pamela Paterson and the Knit and Nibble crew must swap swatching for sleuthing in order to put a Christmas killer on ice.

Leslie Meier: LESLIE MEIER is the acclaimed author of over twenty Lucy Stone mysteries and has also written for Ellery Queen’s Mystery Magazine. She is currently at work on the next Lucy Stone mystery. Readers can visit her website at www.LeslieMeier.com.
|||LEE HOLLIS is the pen name for Rick Copp, a veteran Hollywood screenwriter who has written for numerous television series, including The Golden Girls, Wings, Scooby-Doo, Teen Titans, and Barbershop. He is the co-writer of The Brady Bunch Movie and has written a number of novels under his own name. He also produces, writes, and stars in the hit web series Where the Bears Are. With his sister Holly Simason, he co-authors the Hayley Powell Food & Cocktail Mysteries book series using the Lee Hollis name. He lives in Palm Springs, California.|||Peggy Ehrhart is a former English professor who lives in Leonia, New Jersey, where she writes mysteries and plays blues guitar. She holds a Ph.D. in medieval literature from the University of Illinois and taught writing and literature at Queens College, CUNY, and Fairleigh Dickinson University, where she was a tenured full professor. Her short stories have appeared in Futures Mystery Anthology Magazine, Crime and Suspense, Flashing in the Gutters, Spinetingler, Crime Scene: New Jersey 2, and Murder New York Style. A longtime member of Mystery Writers of America and Sisters in Crime, Peggy served on the board of MWA New York as head of the Mentor Committee. She was president of Sisters in Crime NY/TriState from 2013 to 2015. Peggy regularly attends mystery-writing conferences and participates in conference panels and also gives talks on mystery fiction at libraries in New York, Connecticut, and New Jersey.