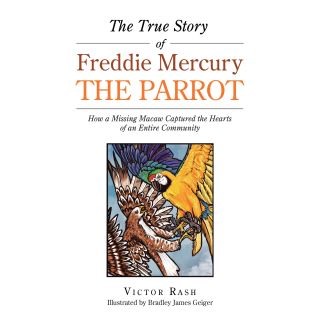 The True Story of Freddie Mercury the Parrot

How a Missing Macaw Captured the Hearts of an Entire Community

When author Victor Rash visited a bird rescue and encountered the bird that would eventually become Freddie Mercury, a blue-and-gold–scarlet macaw mix, he was thrilled. He knew the one-and-a-half-year-old parrot was very special. Freddie quickly made himself part of Victor’s life, playing with toys and living happily in the Florida room at the back of the house. Then one January day a few years later, in the midst of a remodeling project, Victor accidentally took Freddie outside on his shoulder. The parrot flew off for a strange adventure, leaving Victor wondering how he would get his friend back. Over the course of the next ten days, the bird faced threats from cold, storms, and birds of prey, all while Victor and members of his community worked to bring Freddie home. His desperate search finds help from many neighbors, a local radio station, and an out-of-state police department, eventually delivering Freddie back home, where he belonged. This personal narrative recounts the tale of how an entire community came together in an effort to rescue an escaped tropical parrot in the middle of winter.

Victor Rash: Victor Rash was born in Dover, Delaware. He moved to Wilmington, Delaware, at a young age and has continued to reside there ever since. After serving four years in the US Air Force, he attended Brandywine College on a baseball scholarship. He has owned and been involved with training a standardbred racehorse that raced at the three racetracks in Delaware.