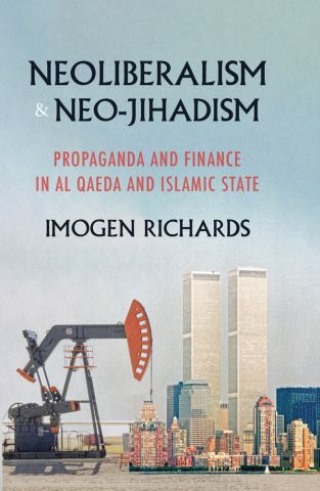 Propaganda and finance in Al Qaeda and Islamic State

Few social and political phenomena have been debated as frequently or fervidly as neoliberalism and neo-jihadism. Yet, while discourse on these phenomena has been wide-ranging, they are rarely examined in relation to one another. Neoliberalism and Neo-jihadism examines political-economic characteristics of twentieth- and early twenty-first-century ‘neo-jihadism’. Drawing on Bourdieusian and neo-Marxist ideas, it investigates how the neo-jihadist organisations, Al Qaeda and Islamic State, engage with the late modern capitalist paradigm of neoliberalism in their anti-capitalist propaganda and quasi-capitalist financial practices. An investigation of documents and discourses reveals interactions between neoliberalism and neo-jihadism characterised by surface-level contradiction, and structural connections that are both dialectical and mutually reinforcing. Neoliberalism here is argued to constitute an underlying ‘status quo’, while neo-jihadism, as an evolving form of political organisation, is perpetuated as part of this situation. Representing differentiated, unique, and exclusive examples of the (r)evolutionary phenomenon of neo-jihadism, Al Qaeda and Islamic State are demonstrated to be characteristic of the mutually constitutive nature of ‘power and resistance’. Just as resistance movements throughout modern history come to resemble the forms of power they sought to overthrow, so too have Al Qaeda and Islamic State reconstituted the dominant political-economic paradigm of neoliberalism they mobilised in response to.

Imogen Richards: Imogen Richards is a Lecturer in Criminology at Deakin University and member of the Alfred Deakin Institute for Citizenship and Globalisation