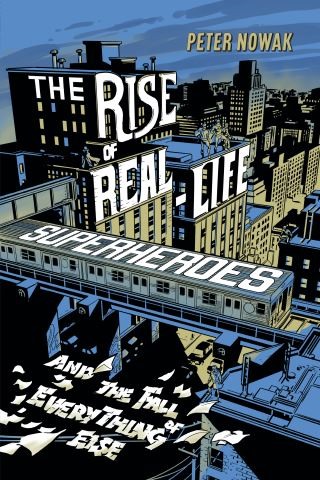 The Rise of Real-Life Superheroes

and the Fall of Everything Else

Meanwhile, back in the darkened alleys of a city near you… trouble is brewing. A fight breaks out. A mugger shakes down an innocent tourist. Inequality is on the rise.

Enter our heroes. Dark Guardian chases off an angry drug dealer in Manhattan. Mr. Xtreme charges in and breaks up a San Diego bar brawl. T.O. Ronin hugs a homeless man on the snowy streets of Toronto. These aren’t the big-screen or comic-book heroes that have been increasingly dominating pop culture. They’re real-life superheroes: individuals who take on masked personae to fight crime and help the helpless. They don’t have superpowers, but they do try to make the world a better place.

Lifelong comic-book fan and veteran journalist Peter Nowak goes to the source of this phenomenon, meeting with real-life superheroes in North America and around the world to get their stories and investigate what the movement means for the future of society. To some people, real-life superheroes may seem like quirky outliers or dangerous vigilantes but, as Nowak shows, they are also archetypes whose job is to remind us of the better part of human nature.