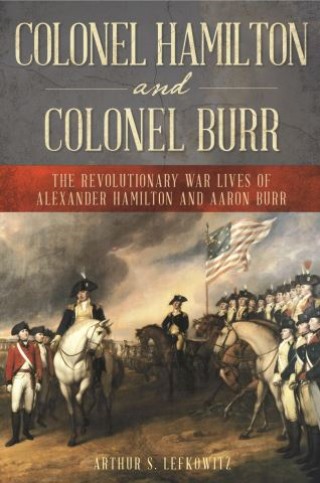 The Revolutionary War Lives of Alexander Hamilton and Aaron Burr

The final meeting of Alexander Hamilton and Aaron Burr took place in in 1804. It ended with Burr mortally wounding Hamilton in a duel. Hamilton and Burr first met in 1776, during the American Revolution. Their wartime experiences would shape their lives as Colonel Hamilton and Colonel Burr recounts.

They were both young American officers at the time working to defend New York City against a British attack. Burr was a tough Revolutionary War combat veteran, having fought in the 1775 campaign to seize Canada from the British. In Canada, Burr battled alongside then Colonel Benedict Arnold and attacked the walled city of Quebec with General Richard Montgomery. Burr next accepted an invitation to join Washington’s headquarters staff. This book includes an account of Captain Burr’s brief tenure on the job that led to a lifelong animosity between him and Washington. In 1776, Hamilton was a captain and commander of a New York State artillery company. He leveled his cannons at the British at New York City, White Plains, Trenton, and Princeton before joining Washington’s headquarters staff. Both Hamilton and Burr wintered at Valley Forge and fought in the day-long Battle of Monmouth. After recounting the Revolutionary War exploits of Hamilton and Burr, this book then describes their postwar lives and political rivalry and why Washington told then President John Adams in 1798 that Hamilton was his principal aide de camp.

Colonel Hamilton and Colonel Burr is a fresh approach to the American Revolution from the standpoint of two of its most interesting participants.