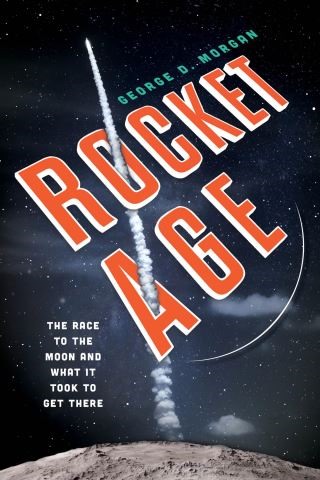 Rocket Age traces the history of spaceflight innovation from Robert Goddard’s early experiments with liquid fuel rockets, through World War II and the work of Wernher von Braun and his German engineers, on to the postwar improvements made by Sergei Korolev and his team in the Soviet Union, and culminating with the historic Moon walk made by Neil Armstrong and Buzz Aldrin on July 20, 1969.

From designers to engineers, and even communication specialists and the builders who assembled these towering rockets, hundreds of thousands of people worked on getting humans to the Moon, yet only a few have been recognized for their contributions. George D. Morgan sets the record straight by giving these forgotten figures of space travel their due.

The son of rocket scientists who worked directly on NASA projects Mercury, Gemini, and Apollo, Morgan gives behind-the-scenes details on the famous missions, including a rare interview with Dieter Huzel –Wernher von Braun’s right-hand man and a chief engineer on every major manned space program.

Even the most voracious readers of US space flight history will discover things in this book that they have never read before. Rocket Age shines a light on those that have for too long been left out of the picture of the race to land on the Moon.

George D. Morgan: George D. Morgan (Santa Paula, CA) is the Playwright in Residence at the California Institute of Technology. He is the author of Rocket Girl, as well as more than a dozen stage plays and musicals, including Second to Die, Nevada Belle, and Thunder in the Valley. He is the son of two rocket scientists, including Mary Sherman Morgan, America's first female rocket scientist.