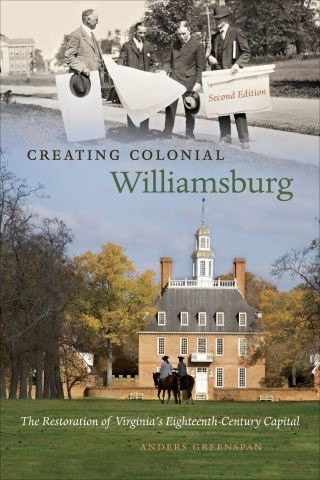 The Restoration of Virginia's Eighteenth-Century Capital

In Creating Colonial Williamsburg, Anders Greenspan examines the restoration and re-creation of the structures and gardens of Virginia's colonial capital beginning in 1926. The restoration was undertaken by the Rockefeller family, whose aim was to promote a twentieth-century appreciation for eighteenth-century ideals. Ironically, those ideals, including democracy, individualism, and representative government, were often promoted at the expense of a more complete understanding of the town's true history. The meaning and purpose of Colonial Williamsburg has changed over time, along with America's changing social and political landscapes, making the study of this historic site a unique and meaningful entry point to understanding the shifting modern American character.

In recent years, financial struggles and declining attendance forced a new interpretation of the town, extending the presentation into the period of the American Revolution, while adding new interpretive approaches such as street theater and a greater emphasis on technology. Over its eighty-year history, says Greenspan, Colonial Williamsburg has grown and matured, while still retaining its emphasis on the importance of eighteenth-century values and their application in the modern world.