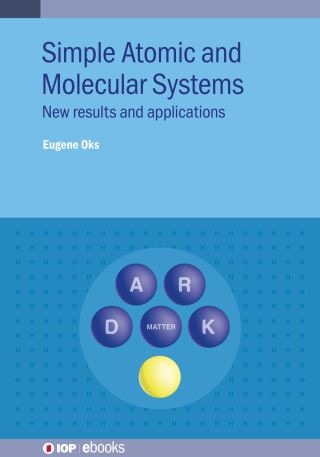 Simple atoms are atoms consisting of no more than three particles. They are the test-bench of atomic physics and quantum mechanics. This book presents these findings, bridging the gap between textbook descriptions of these systems and the latest research.

Counterintuitive phenomena in simple atomic and molecular systems are revealed, along with their fundamental importance and practical applications. These include the advanced methods for lasing in the infra-red and microwave ranges, the improved design of X-ray lasers, and advanced methods for spectroscopic diagnostics of plasmas. The analytical solutions of simple atoms and their role in theoretical physics is also discussed. The book is aimed at graduate students and researchers in the field of atomic and molecular physics.

Eugene Oks has founded and developed new research fields such as intra-Stark spectroscopy (a new class of nonlinear optical phenomena in plasmas), masing without inversion (advanced schemes for generating/amplifying coherent microwave radiation), and quantum chaos (nonlinear dynamics in the microscopic world). He is the Editor-in-Chief of the journal International Review of Atomic and Molecular Physics and has published approximately 500 papers as well as eight books.