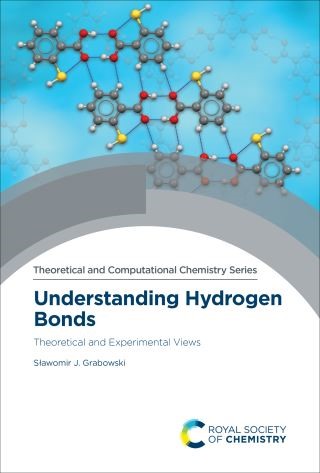 Hydrogen bonded systems play an important role in all aspects of science but particularly chemistry and biology. Notably, the helical structure of DNA is heavily reliant on the hydrogens bonds between the DNA base pairs. Although the area of hydrogen bonding is one that is well established, our understanding has continued to develop as the power of both computational and experimental techniques has improved.
Understanding Hydrogen Bonds presents an up-to-date overview of our theoretical and experimental understanding of the hydrogen bond. Well-established and novel approaches are discussed, including quantum theory of ‘atoms in molecules’ (QTAIM); the electron localization function (ELF) method and Car–Parinnello molecular dynamics; the natural bond orbital (NBO) approach; and X-ray and neutron diffraction and spectroscopy. The mechanism of hydrogen bond formation is described and comparisons are made between hydrogen bonds and other types of interaction. The author also takes a look at new types of interaction that may be classified as hydrogen bonds with a focus on those with multicentre proton acceptors or with multicentre proton donors.
Understanding Hydrogen Bonds is a valuable reference for experimentalists and theoreticians interested in updating their understanding of the types of hydrogen bonds, their role in chemistry and biology, and how they can be studied.

Sławomir J Grabowski: Sławomir Janusz Grabowski was born in Warsaw, Poland (1956). He received master´s degree (1981) and Ph.D. (1986) at the University of Warsaw, D.Sc. (1998) at the Technical University of Łódź, Poland. From 1986 he worked at the University of Białystok in Poland and from 2002 at the University of Łódź (full professor from 2005). He was temporarily employed at various universities; E.T.H., Zürich, Switzerland (1987), University of Uppsala, Sweden (1988), University of Grenoble, France (1992), Jackson State University, USA (in 2003-2008), Fukuoka University, Japan (2009, awarded by Japan Society for the Promotion of Science), Université Pierre et Marie Curie, Paris, France, invited professor (June 2013). Currently he is employed as the Ikerbasque Research Professor at the University of the Basque Country, Spain (from 2009). Dr. Grabowski has authored or co-authored about 200 papers, 14 book chapters and he has edited two books on hydrogen bond. His work encompasses the analysis of hydrogen bond, and other interactions. He is a member of the Editorial Boards of MDPI journal Crystals (editor-in-chief of the section Crystal Engineering), Journal of Physical Organic Chemistry and Computational and Theoretical Chemistry; he is a member of the Advisory Board of Sci (MDPI journal) and he was a guest editor of special issues of Structural Chemistry, Computational and Theoretical Chemistry and Crystals; numerous plenary, keynote and invited lectures at the international conferences of physical chemistry and theoretical chemistry.