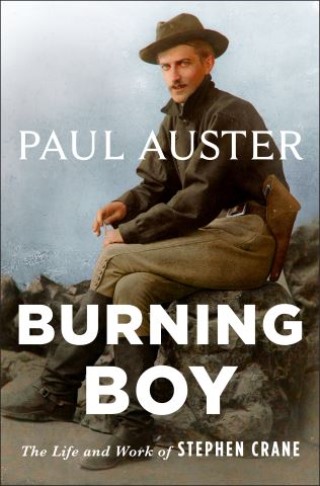 The Life and Work of Stephen Crane

With Burning Boy, celebrated novelist Paul Auster tells the extraordinary story of Stephen Crane, best known as the author of The Red Badge of Courage, who transformed American literature through an avalanche of original short stories, novellas, poems, journalism, and war reportage before his life was cut short by tuberculosis at age twenty-eight.

Auster’s probing account of this singular life tracks Crane as he rebounds from one perilous situation to the next: A controversial article written at twenty disrupts the course of the 1892 presidential campaign, a public battle with the New York police department over the false arrest of a prostitute effectively exiles him from the city, a star-crossed love affair with an unhappily married uptown girl tortures him, a common-law marriage to the proprietress of Jacksonville’s most elegant bawdyhouse endures, a shipwreck results in his near drowning, he withstands enemy fire to send dispatches from the Spanish-American War, and then he relocates to England, where Joseph Conrad becomes his closest friend and Henry James weeps over his tragic, early death.

In Burning Boy, Auster not only puts forth an immersive read about an unforgettable life but also, casting a dazzled eye on Crane’s astonishing originality and productivity, provides uniquely knowing insight into Crane’s creative processes to produce the rarest of reading experiences—the dramatic biography of a brilliant writer as only another literary master could tell it.

Paul Auster: Paul Auster is the bestselling author of 4 3 2 1, Sunset Park, Invisible, The Book of Illusions, and the New York Trilogy, among many other works. In 2006 he was awarded the Prince of Asturias Prize for Literature. Among his other honors are the Prix Médicis étranger for Leviathan, the Independent Spirit Award for the screenplay of Smoke, and the Premio Napoli for Sunset Park. In 2012, he was the first recipient of the NYC Literary Honors in the category of fiction. He has also been a finalist for the International IMPAC Dublin Literary Award (The Book of Illusions), the PEN/Faulkner Award (The Music of Chance), the Edgar Award (City of Glass), and the Man Booker Prize (4 3 2 1). He is a member of the American Academy of Arts and Letters and a Commandeur de l’Ordre des Arts et des Lettres. His work has been translated into more than forty languages. He lives in Brooklyn, New York.