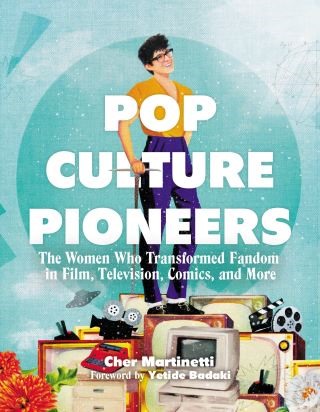 The Women Who Transformed Fandom in Film, Television, Comics, and More

Celebrate the empowering and inspiring women who helped create, shape, and make pop culture great, from the creator of SYFY WIRE's FANGRRLS and the podcast "Forgotten Women of Genre"!

In every medium in popular culture—from books, films, and video games to comics, television, and animation—women have been instrumental in creating and shaping the worlds, characters, and genres that we know and love.  However, much of their hard work and innovation has gone largely unrecognized—until now. With a foreword by American Gods actress Yetide Badaki and essays exploring the history and transformation of pop culture's genres and mediums, Pop Culture Pioneers explores and pays respect to the women who played a crucial role in creating and influencing of some of the most famous worlds and characters in pop culture including:

Cher Martinetti is a author, writer, and founder of SYFY's FANGRRLS, the female-centric genre vertical syfy.com that ran from 2016-2020. She co-hosted & executive produced its flagship podcast Strong Female Characters. Cher has also frequently written, developed & appeared in various videos for SYFY, including the 20 Women to Watch in 2020 special during Women's History Month. She's the creator, executive producer, and former cohost of the popular podcast The Churn—the official post-show wrap-up podcast of the critically acclaimed space opera The Expanse. Cher's hosted panels at ATX festival, New York Comic Con and San Diego Comic Con, & has interviewed celebrities on the live stage for ECCC, C2E2, & NYCC. Her work has also been seen on Cracked, Playboy, Death & Taxes, Uproxx, and IFC.com.