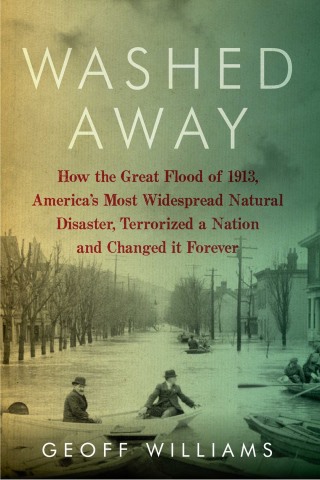 How the Great Flood of 1913, America's Most Widespread Natural Disaster, Terrorized a Nation and Changed It Forever

The incredible story of a flood of near-biblical proportions -- its destruction, its heroes and victims, and how it shaped America's natural-disaster policies for the next century.

The storm began March 23, 1913, with a series of tornadoes that killed 150 people and injured 400. Then the freezing rains started and the flooding began. It continued for days. Some people drowned in their attics, others on the roads when they tried to flee. It was the nation's most widespread flood ever—more than 700 people died, hundreds of thousands of homes and buildings were destroyed, and millions were left homeless. The destruction extended far beyond the Ohio valley to Illinois, Indiana, Michigan, Nebraska, Pennsylvania, Tennessee, Arkansas, Louisiana, Kentucky, West Virginia, New York, New Jersey, and Vermont. Fourteen states in all, and every major and minor river east of the Mississippi.

In the aftermath, flaws in America's natural disaster response system were exposed, echoing today's outrage over Katrina. People demanded change. Laws were passed, and dams were built. Teams of experts vowed to develop flood control techniques for the region and stop flooding for good. So far those efforts have succeeded. It is estimated that in the Miami Valley alone, nearly 2,000 floods have been prevented, and the same methods have been used as a model for flood control nationwide and around the world.

Geoff Williams: Geoff Williams is the author of C.C. Pyle's Amazing Foot Race: The True Story of the 1928 Coast-to-Coast Run Across America. For most of his life, Williams has lived less than an hour away from the Great Flood's epicenter in Dayton, Ohio.